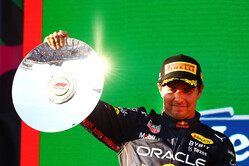 Sergio Perez: "It was a good result but, unfortunately, we lost Max and it would have been great to have a double podium for the Team. On the other hand, it is a good result after so many unlucky moments in the first couple of races for me. It was a very complicated race with the start I had and the safety cars but we managed to overcome it. My first start was very poor, we struggled a lot with degradation on the medium tyre, we were a bit unlucky with the safety car and we lost two positions which we recovered later. We got a few things wrong across the weekend and we were battling more with Mercedes than Ferrari so the pace wasn't where we want it to be, but we will work on it. There is some good analysis to be done from this weekend because yesterday we were close for pole but in the race we were a bit too far off the pace. The fastest guys out there are Ferrari, we want to be up there fighting with them and today that wasn't the case. If we can improve the car a little, then we can be more confident."

Max Verstappen: "It's of course very disappointing to not finish today's race, I don't really know what happened to the car yet, we'll take it back to the factory and regroup. I already knew there was a possibility ahead of the race that we might not finish but I tried not to think about it. This is not what you need when you want to fight for the Championship, the gap is already pretty big. Of course, Checo did well to come second, he scored some good points. Overall it doesn't look like there is an easy fix so we need to work hard as a Team, there are a lot of things to work on. We'll wake up tomorrow and focus on the upcoming races and do the best that we can. It is of course a long season and a lot can happen; I think at this stage we need 45 races! [laughs]"

Christian Horner, Team Principal: "Checo drove an exceptional race today with some stunning overtakes to secure his first podium of the season and bag some solid Championship points. But it was very much a day of mixed emotions with Max not finishing. We think it was an external fuel leak and we need to understand exactly what has caused that failure, so it was a very frustrating race in that respect. But we are in this as a team and we will bounce back. We didn't have the pace of Ferrari today, so congratulations to Charles. It's a long season ahead and we have the basis of a quick and competitive car, but we need to get on top of these issues quickly and we will keep pushing."