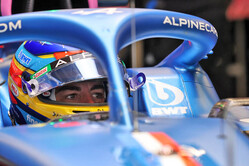 Following Fernando Alonso's retirement from the Saudi Arabian Grand Prix, Alpine engineers traced the cause to a disintegrating water pump as he takes on a new unit without penalty.

The Spaniard had been thrilling fans with a dogfight with teammate Esteban Ocon, when has was forced to retire just 35 laps into the race, moments before Daniel Ricciardo also pulled off track.

Like most retirements so far this season his team was unwilling to state the issue that sidelined the two-time world champion, and while it was initially thought to be engine-related it has now been revealed as being a disintegrating water pump.

"It wasn't the engine, but a water-pump failure," team boss Laurent Rossi tells Auto Hebdo, "and that led to a lack of cooling and a host of problems, like the engine overheating, which triggered more troubles.

"Fernando managed to continue as the engine was working, although in less than ideal conditions," he adds. "But we preferred to stop him as the water pump was defective.

"We've since identified the problem, and hopefully ii will be solved for Melbourne. It's related to some brand new engine components that haven't yet been fully validated, as is the case for all teams.

"The good news is that it isn't a structural or in-built issue," he reveals. "There are no doubts about the engine's design and architecture as the unit is working as expected."

Nonetheless, the engine is scrapped and a new unit will be introduced to the Spaniard's pool of power units.

"The problem is this component is an integral part of the engine," says Rossi of the errant pump. "The water pump ended up disintegrating and falling into the engine.

"If we had wanted to repair it, we would have had to break the seal, so the engine is lost to us, even if its physical integrity is not directly affected. For us it's one less engine."