Domenicali insists that "trust is still there" despite Abu Dhabi 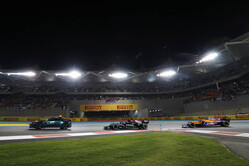 Ahead of the official FIA report into the events of Abu Dhabi, F1 boss, Stefano Domenicali believes the sport will be able to move forward.

With almost perfect timing, the FIA's three-month long investigation into what happened on the night of 12 December will be made public at Saturday's meeting of the World Motor Sport Council in Bahrain.

While some might say (former race director) Michael Masi has already paid the price, F1 boss, Stefano Domenicali believes that rather than focus on individuals it is vital the sport prove that lessons have been learned and that it is able to move on.

"In the next days, the FIA will formally discuss that at the World Motor Sport Council, because I think what we need to avoid is a personal discussion," Domenicali tells Martin Brundle in an interview with Sky Sports.

"We are all human beings," he continues, "you may say that you are performing well as a driver, as a team, as a referee, but this is not relevant to the credibility of the sport, if the sport will take all the lessons in order to improve that.

"The credibility is passing through this kind of action, and this is what we're expecting the FIA to take on board in their preparation of next year.

"I will attend the World Council on Saturday, and we will see. That is the aim, to have a step forward to move forward from Abu Dhabi."

When it is suggested that many fans still regard the Abu Dhabi race as being "fixed", a view that many readers of Pitpass still hold, Domenicali replies: "I have not for a single second in my mind thought that was something built on purpose. As a sportsman, if I thought that was the case, I would not be there.

"And I can guarantee that from Formula 1's perspective, that is not the case," he insists.

"We had last week a meeting with all the promoters, almost all of where we're going are sold out, that means Formula 1 is not that problem and it means the trust is there."

Masi has been dropped ahead of the new season, his role as race director now shared by Niels Wittich and Eduardo Freitas, with assistance for the pair coming from veteran F1 official Herbie Blash, not to mention a new state-of-the-art VAR-style control room.

"We are already in Bahrain. So there is no need to talk about a different approach other than to say what we learned as regulator from that last race,” says Domenicali.

"You don't have the time to make a committee, you need to make sure all what you have around you is enabling you to take the right decision."

In all honesty, this still appears to be focussed on Michael Masi. While we need to know why the Australian made the call that he made - which was entirely at odds with some of his previous decisions - we must know whether he was 100 percent responsible for the decision behind the call or whether, as we suspect, he was following orders and in which case whose orders he was following.

It is all very well for Mr Domenicali to say the trust remains and that it is time to move on, for as boss of F1 he has a vested interest.

No matter which team or driver you support, the only true winner that night was the media in term of viewers stats for broadcasters and readers stats for websites and publications, all of which subsequently healthily impacted F1 in terms of the balance sheet.

With every day that passes the teams announce new sponsors, McLaren bringing Google on board only yesterday, thereby proving that all publicity is good publicity.

However, despite Domenicali's assurances what will really prove telling in the weeks and months ahead is whether the sport can win back those fans lost last December, those fans not easily won over by flashy videos over a pulsating rock soundtrack, those fans that feel the sport has lost/sold its soul to Netflix in the like as it chases ratings and profit over honesty and sportsmanship.