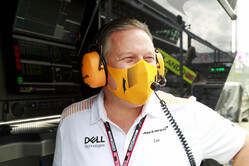 McLaren boss, Zak Brown says he is "adamantly opposed" to increasing the budget cap in order to allow for damage incurred at Sprint events.

While last season witnessed three Sprints, it is understood that F1 bosses are considering as many as six this year.

The first could come as early as the season opener, where a Sprint on the outer circuit used for the 2020 Sakhir Grand Prix, would take place.

With an eye on the extra costs incurred by running additional races - albeit sprints of up to 100 kilometres - not to mention the possibility of crash damage, some teams have argued for an adjustment to the budget cap.

However, with the number of Sprints doubled this year, some teams are suggesting a sizeable increase to the budget cap, something which Zak Brown is vehemently against.

"Some want to take the opportunity to raise the cost cap, a few of the teams," he said. "We're adamantly opposed to raising the cost cap on anything. So we're going to need to work through that issue.

"We came into this thinking there could be very little damage, and it turns out there was very little damage. And yet a couple of the teams still want to take the opportunity to raise the budget by a ridiculous number, by almost, ‘well, what if I write off a car every race?'

"From what I've seen, I saw more crashes in practice than I have in the sprint races," he added.

"It might be new to some teams to actually have to manage a budget, but I think that's in the spirit of the sport, so you can certainly match the revenue to the expense and resolve that.

"But I think the revenue will grow over time, and I think we need to be very careful to be fiscally sustainable, that certain teams take the opportunity to try and raise that all the time. We need to resist that."