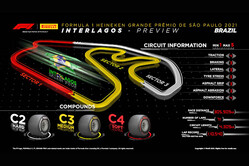 With the hard tyre not being used extensively in 2019, this year’s choice should allow a more even use of all the compounds and potentially wider variations in strategy.

The short and intense Interlagos lap is one of the relatively few anti-clockwise layouts on the calendar, with a non-stop succession of corners that keeps the tyres working hard: particularly the front-right. The short lap means that traffic can be an issue and there’s also a high safety car probability, so any sprint qualifying or race strategy needs to bear that in mind.

Apart from the long uphill Arquibancada left-hander, all of the 15 corners are reasonably short, meaning that the lateral loads on the tyres are contained and the energy demands quite low: it’s more about traction and braking.

The weather in Brazil at this time of year can range from intense heat to torrential rain, with some grooves having been cut in the asphalt to help drainage in the event of heavy rain.

In 2019, when the last Brazilian GP was held, Red Bull’s Max Verstappen won the Brazilian Grand Prix with a three-stop strategy, following two safety cars at the end of the race. There were three different strategies in the top four, with McLaren’s Carlos Sainz (fourth at the flag) stopping just once from last on the grid. Without the safety cars, a two-stop strategy would have been the favoured tactic.

Mario Isola: "This year we return to a nomination more similar to the choice made up until 2018, using the C4 as the soft option. In 2019 we decided to go a step harder, trying to prevent graining and degradation on the soft, but as a result the hard tyre was not used much. Interlagos is an old-school track that keeps drivers and tyres busy and often produces some dramatic races, as we saw last time. The weather is another variable factor: we've experienced some of the hottest track temperatures of the season in the past, and also the complete opposite. As a result, this year's more versatile tyre selection should be able to cope with all the wide-ranging demands of the Brazilian Grand Prix and provide some different strategies. Although the race takes place at around the same time of year as it did last time, the teams have not experienced sprint qualifying at Interlagos before, so there will be plenty to discover."