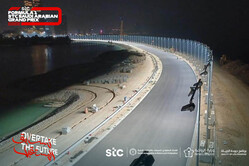 Scheduled for the weekend of the 4th/5th December, the Saudi Arabian Grand Prix race takes place on a 27-turn, 3.837 mile (6.175km) track that will be both the longest and fastest street circuit on the F1 calendar.

50 days before the event, as new images are released showing the circuit's lighting system in all it glory, the event's CEO, Martin Whitaker talks about how the race will impact the country.

"It's a fantastic platform which gives Saudi Arabia a wonderful opportunity on the world stage to change the perceptions about the Kingdom," he says. "A lot of people know very little about the country and as a result the idea they have is very different to when they get to experience it for themselves.

"The government has a Vision 2030 scheme," he continues, "which has a dual purpose to encourage tourism and to develop a more inclusive society.

"It's a rapidly changing country in which 75 per cent of the population are under the age of 35. The demographics are significantly young, and the people are vibrant, creative and colourful - plus with regards to the staff working for us - 42 per cent of them are women.

"The people here are amazingly proud of their country," he says, "and they feel this is a wonderful opportunity to show the rest of the world this is a very special place.

"They have always made it clear they want people to come to Saudi Arabia - and come to Jeddah - and experience the lifestyle, community and culture for themselves.

"The people here are renowned for their friendship and hospitality and the welcome you receive is warm and heartfelt," he adds. "When Formula 1 fans come to Jeddah they will experience the sunshine, the sea, the food and the great people here and they will leave enriched after their visit.

"We will be the focal point of the sporting world, and it will be an amazing opportunity to showcase this fantastic facility and beautiful country."

However, no doubt paying one of the heftiest hosting fees of the year, Whitaker admits that the event is important for business.

"The Grand Prix provides a perfect platform for business networking and the development of commercial opportunities," he says. "We have a lot of local companies, like stc and Invest Saudi, who want to get involved in Formula 1 as they understand the value of this global platform with which to promote themselves.

"We are working with a lot of countries to attract companies to Saudi Arabia because Formula 1 offers a global shop window for the business community."

"In addition to the tourism, business and commercial uplift that any venue receives when associated with a round the world championship, there will be a lasting legacy for both the city and people of Jeddah," he adds. "Not only will the circuit be used for national and international motor races, but it will also be utilised for other community and charitable events, such as running and cycle races. In addition, the promenade around the track will feature leisure facilities, such as beach soccer, volleyball, paddle and tennis courts as well as outside gym and fitness equipment.

"There are a number of projects, in addition to the marina, luxury hotels, restaurants and retail," he adds. "There will be a junior kart circuit for electric karts in the Fan Zone area, in addition to an exhibition of historic Saudi competition vehicles.

"In the future there will be an Esports hub and next to the Red Sea Shopping Mall will be a Visitor's Centre, which will be an educational facility, not just for F1, but for Saudi Arabian motorsport. The Visitor's Centre will double up as a coffee shop, a meeting place, a merchandise centre and a ticket office. 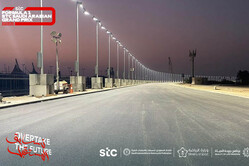 "We are also encouraging colleges, schools and universities to use it as a lecture theatre. There will also be Formula 1 show cars exhibited and an area for students to understand more about the history and technological aspects of the sport and the benefits it brings to the Kingdom."

In keeping with the sport's increasing green credentials, he reveals the environmental work that is underway as construction of the track continues.

"We have a Sustainability team who are overseeing a number of important projects and one of those has been the regeneration of the lagoon area in the Corniche. It had fallen into disrepair, but it has been dredged with new 'in and out' valves put in place.

"This area will form the island where the international media centre will be based. There are a number of other plans in place to ensure the race is sustainable, for example, we are installing a number of EV charging points in the car parks and marshal posts will all have solar panels. We'd done a lot already and have more initiatives planned for the future.

"It's the hub of the community," he says of the Jeddah Corniche, "where thousands of families head every evening, usually around sunset, to enjoy the warm air and have picnics with their family and friends.

"Culturally it's an important place for people to gather, as well as having the opportunity to rent bicycles and take advantage of the two-way cycle lanes constructed along the coastline. The Corniche is a focal point for the people of Jeddah to come and enjoy, get exercise and to take advantage of the fantastic restaurants, retail outlets, coffee shops, mosques - and with the landscaping around the circuit - it will add a massive amount of value to Jeddah as a location and will give the people of the city a new focal point for their leisure, fitness, relaxation or family time.

"Jeddah is a stunning location with its proximity to the coastline and the great marine life and coral reefs offshore," he adds. "There are extraordinary deserts to the north and mountains to the east.

"It's a city that has a vibrant heart with a great culture and community spirit. Plus, with the Dakar Rally and Extreme E events organised not far from Jeddah, it's an ideal location from a motor sports perspective to host a Grand Prix.

"The track is on a narrow strip of land which will form a northerly extension to the current Jeddah Corniche," he adds, "linking the existing four kilometres of walkways and cycle paths to an additional three kilometres that will encompass both the island mosque and the new marina.

"The circuit is literally be a stone's throw from the shore of the Red Sea. Perhaps the most spectacular corner will be the Turn 13 parabolica, next to the Marina, after which the drivers will accelerate to 322 km/h past the new luxury hotel that has been built in time for F1's arrival."