Nothing gets a fresh New Year hopping like forming a new police association!

They knew how to rock back in 1950! The International Police Association (IPA) being formed on the first day of a virginal year, eager to discover the curios hidden within another orbit of our local star, as the second-half of the 20th Century awoke, blinking in the bright light of a hopeful dawn.

It was a year the motorsport world had a brand new formula championship to excite, confuse, and delight teams, drivers, and fans alike. It was the year the Formula One World Championship was written into the rule books, a few years after the formula itself was first defined. With drivers, and engineers still raw from World War Two, it was a radiant new hope of energy pouring into a fascinating motorsport adventure. An artistic mix of back to the future - as many cars were still based on pre-War technology - blended with a new global championship was cause for delight.

Let us have a gentle wander through 1950, using it to guide our prognostications on what might be for 2022, when, once more, Formula One writes new rules with the hope of generating a season to remember. Will 2022 be back to the future, a cause to party for all? Or a glorious mix of classic old, curious new, brief delights, crushing disasters, and that special cocktail only modern Formula One can manage, being a jolting blend of both back-stabbing and mirth-inducing shocks!

Orderly matters first. We must dispatch well-chosen invites, and ready the party arena. With the bunting, and balloons fastened around the dance hall, then we can await our guests. Never late for a party, we immediately find Miss Physics, and Lady Luck swapping off-colour cheeky jokes next to the punch bowls while they, like us, wait with excited anticipation to see who turns up this year to dance, impress, or at least serve as a stern warning to others... The invitations went out on time, but who will show, and will we perchance have surprise guests?

A swift return to 1950 for guidance. Fifteen year-old Elvis commences guitar lessons with Lee Denson, a neighbour in Memphis, Tennessee, remaining a few practice sessions distant from changing the planet. On May the 13th in North America The Third Man Theme by Anton Karas was number one, while over in England it would be another two years before the concept of a singles chart would crystallise.

On the other side of the planet, Australia, another island nation, was commencing preparations for the 1956 Olympics by ensuring ice, and cold beer would be aplenty, while drop-bears would be kept off the streets of Melbourne, ensuring tourists were safe on arrival. 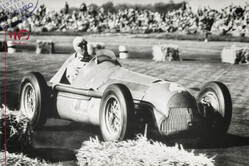 Returning focus to England, Silverstone, a former World War 2 airbase, on May 13th 1950, we find Giuseppe Farina starting the British Grand Prix from pole position in his Alfa Romeo 158. Not the first Formula One race, as the bounding formula rules had existed prior to 1950, and this was a time when non-championship races were common. Indeed Fangio had already won both the Pau and San Remo Grands Prix as non-championship races in 1950, before this first championship race.

One can only imagine that Valtteri Bottas, and the current Alfa team will be dreaming of such a remarkable start to the 2022 season. Should they complete such a feat I believe that, other than at the Red Bull, and Mercedes fortresses, smiles would abound at such a fine racing name once more claiming top step on the podium.

Ferrari? Ah. They missed the first race, Enzo unable, or possibly unwilling, to send cars to race in Britain. They commence their championship at the next race, being Monaco.

Monaco! Along with Silverstone, a legendary circuit, loved, and cursed in equal measure for its unique character. In 1950 just seven cars finished after a major first lap crash. Fangio in the Alfa Romeo won by a full lap, with Ascari second in the Ferrari, and Chiron in the Maserati third. What a podium of men and manufacturers! Please may that delight be repeated in 2022.

Round three and off to the Americas, and the 34th running of the Indy 500 on Tuesday 30th May. How I wish this cross-over of classic races within differing championships were still the case! The mixture of teams, machines, and drivers if F1 mixed it with the current Indy 500 would be fascinating. Far more joyful than handing out awards for best presented napkins or parallel parking, or whatever Liberty, and F1 elect to award in 2022.

As the third race of the 1950 season the Indy 500 saw not one European driver cross the Atlantic and race! No doubt screaming forward to the future of the 2022 season, Liberty and the FIA might succeed in creating a new drivers' strike, and find themselves with a driverless race. Or indeed, with the delights of legal complexities, and cash-flow confusions the drivers might find themselves without an organiser or circuits.

Giuseppe Farina had planned to compete the 1950 Indy 500, however his car did not arrive in time to race. The chances of the teams arguing for the exclusion of each other's cars, or at least segments of the power plants is sure to be a risk for the top players next year, if one looks at the wailing, and tears this season. Using this 1950 race as a guide I'm confident high-jinks gamesmanship, and self-interest, plus misplaced disinterest, will run wild through the 2022 season.

Ah! The 1950 Indy 500 winner? Over 138 laps (being a hint over 345 miles) in rainy weather before an impressive crowd of 175,000, Johnnie Parsons in a Kurtis Kraft-Offenhauser, ahead of Bill Holland, and Mauri Rose, both in Deidt-Offenhauser cars. What Liberty Media would give for an all American podium, being all drivers, and constructors, at a future American Grand Prix! Not to be in 2022 though.

Winging back to Europe, not too far from where Red Bull currently gives us wings, we find ourselves on the 4th of June at the Bremgarten circuit in Switzerland, a fine 4.5 mile road circuit on which Fangio set pole position with a time of 2 minutes 42.1 seconds. On this occasion he could not convert this to a win, retiring on lap 32 of 42 following an engine failure.

The two other Alfa Romeos flew to the two top steps of the podium. Nino Farina claimed victory from his team mate Luigi Fagioli, with Louis Rosier in the Talbot-Lago-Talbot one lap down in third.

A return to Switzerland in a future season? Unlikely. While, for legal reasons, Max Mosley moved the FIA there, both they, and Liberty appear to be romping into other global areas to host races. The Saudi Grand Prix has recently been announced.

Indeed the Saudis are increasingly appearing on dance cards within the Formula One Dance Hall. Are they set to make a surprise appearance next to the zero-alcohol punch bowl, to start swapping stories with Miss Physics, and Lady Luck, before dancing with the fates, and so glowing with the delights of designing the future? May-be season 2022 will delight with the unexpected! Yet it will not be Switzerland.

Whipping back to 1950... Farina kept momentum going, placing his car on pole for the Belgian Grand Prix on 18th June at Spa-Francorchamps with a time of 4 minutes, and 37 seconds around the flowing 8.8 mile circuit. Yet this time it was Fangio who claimed the top step, from Fagioli in the other Alfa, and Nino down in fourth, Rosier in the Talbot having once more claimed third place. This was a race at which Ferrari appeared with a brand new V12 engine. The sweet delights of not just changing engine components during a season, but delivering an entirely new design! 5th and 6th was their reward, sounding much like the Ferrari performance right now. Funny how some aspects of history insist on repeating themselves. We can expect more, so-close performances from Ferrari in 2022, I believe.

Rolling forward to 2nd July, and we arrive at the French Grand Prix, with the Reims-Gueux road circuit. On a hot, sunny day completing 64 laps of the 4.8 mile circuit it was Fangio's turn for a clean sweep. A 2 minute 30 second pole, the win, and fastest lap.

Fagioli claimed the second step in his Alfa, while Englishman Peter Whitehead claimed a first podium for Ferrari with third. Interestingly Peter was racing the older Ferrari 125, with a supercharged 1.5L V12, while Ascari, and Villoresi in the new works Ferrari 275s had withdrawn during practice as the new 3.3L V12 engines struggled in the heat. More engine trauma for Ferrari in 2022? I believe we can count on it.

Three non-starters, ten cars retire, and nine finish, albeit with Farina suffering a fuel pump failure on lap 55, and Yves Giraud-Cabantous failing twelve laps out meaning only seven cars running at the end, with the Alfas a full three laps ahead of Whitehead in third. Ferrari three laps down at the finish in 2022? One can only hope not.

The top step constantly shared by the same couple of drivers. One team dominating. Ferrari all over the place. Any of that sound familiar? Truly we are already back to the future! 2022 season, please observe the lessons of 1950!

The 3rd of September, and the seventh and final race of the 1950 championship is held at the Autodromo Nazionale Monza, being the 21st running of the Italian Grand Prix.

Fangio needs to win or come second to be champion, while Fagioli needs to win with Fangio out of the points, and Farina third or lower. Finally, Farina needs to win, with either Fangio third, while he claimed fastest lap, or with Fangio fourth or lower.

A wonderful end to the season with three drivers all capable of winning the championship, yet all three from the same team! A bemusing mix of back to the future, and not... Mercedes has owned the world championship for years. I'm sure if they were allowed to enter three cars, they would have locked out the podium on many occasions. Yet having Monza genuinely contested by multiple Italian manufacturers. What chance in 2022?

Fangio achieved two of the three necessities to be champion. Pole position in a time of 1 minute 58 seconds, followed by a fastest lap of 2 minutes during the 80 lap race, set for 313 miles in total. Sadly on lap 23 his gearbox failed, and it was down to his two team mates.

Farina claimed the win with Ascari finishing second in Serafini's Ferrari, which was using yet another new engine design, while Fagioli finished third once more in his Alfa. What would Ferrari give to have a battle with Alfa for honours at the 2022 Monza race? The Tifosi would be in raptures. Sadly not a probable prediction for 2022.

Farina became for all time the 1950 world champion with a modest total of thirty points from seven dramatic races, one of which had no Formula One cars take the grid! Fangio was second overall with 27 points, and Fagioli was third with 24. A clean championship sweep by Alfa!

Winning margins were frequently a lap or more. Ferrari used three different engine designs in a seven race season, and every manufacturer suffered varying mechanical failures. Yet for a world still recovering from the war, nations rebuilding, and rationing still in place in the UK (until July 1954), it was a season of delight, hope, and fascinating racing across Europe, if not quite the world.

Time to ease back into the DeLorean returning to 2022...