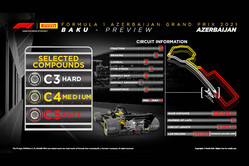 The softest tyres in the Pirelli Formula 1 range have been selected at the Azerbaijan Grand Prix for the first time: C3 as the P Zero White hard, C4 as the P Zero Yellow medium, and C5 as the P Zero Red soft. Notably, this is a step softer than 2019 (the last time that the race was run) and the same nomination as Monaco.

This choice has been made in order to introduce an extra strategic element: last time, the hard compound wasn't used at all during the race. Going a step softer now brings the hard choice into play and encourages more variety in the strategies.

The track surface on the Baku street circuit is one of the less aggressive in terms of asphalt roughness and does not take a lot of energy out of the tyres, making the softest compounds in the range an optimal choice.

• Baku has been described by drivers in the past as having the complexity of Monaco with the speed of Monza. While this isn't precisely the case, it gives a good insight into the nature of the fastest and longest street circuit on the calendar from a driver's perspective.

• Aside from that, Baku has all the characteristics expected from a street circuit: a 'green' and slippery surface that is likely to evolve quickly, especially as it has not been used for two years. The barriers are unforgiving and it's also extremely narrow at one point (Turn 9): all of which elevates the likelihood of a safety car, obviously affecting race strategy in turn.

• The winning strategy last time was a one-stop soft-medium, used by the top four. Charles Leclerc finished fifth for Ferrari by doing the opposite: medium to soft (plus a second late stop for more softs to set the fastest lap). There was quite a wide pit stop window, with some long stints seen on the medium C3 tyre (now the hard for this year's race) in particular.

• Baku is nicknamed the 'city of winds' due to its frequent and variable windy weather. This obviously affects aerodynamic balance on what is already a tricky track in terms of set-up.

• Due to the long straight in Baku, the teams tend to run low downforce levels. This clearly puts the emphasis on mechanical grip from the tyres throughout the 20 demanding corners.

• Pirelli's 2022 18-inch Formula 1 test programme continued last week with two days of wet tyre testing at Paul Ricard with Ferrari drivers Charles Leclerc and Carlos Sainz. On both days the 18-inch intermediates were tested in the morning, before switching to full wets in the afternoon.

Mario Isola: "From one unique circuit to another: Baku provides a very different test to Monaco, but the precision needed to stay out of trouble is similar. For the first time we bring the very softest tyres in the range to Azerbaijan, as also seen in Monte Carlo. The reason for this nomination is that the hard wasn't used at all in the Baku race in 2019, whereas the medium was used extensively. By re-aligning the nominations, we hope to see all three compounds playing an important role and leading to some different strategies."