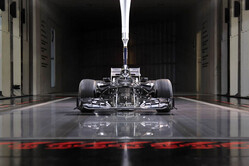 Costs and environmental issues are the main factors as the sport looks to ban windtunnels from 2030. However, as is ever the case with F1, some teams see it differently to others.

In recent years, windtunnels, once the mainstay of aero development before new components hit that track, have seen the time spent in them reduced along with the scale of model, which are now restricted to just 60%.

In a week in which we mourn the passing of Max Mosley, it was the company he founded with Nick Wirth, Simtek Research which pioneered the use of CFD (computational fluid dynamics) in F1, which is increasingly the go-to means of development and widely seen as the future

At a time teams are having to watch the pennies due to the budget cap, windtunnels represent a vast drain on resources, while the power required to drive them is hardly compatible with the sport's sustainability ambitions.

Consequently, the sport is now looking to ban windtunnels entirely from 2030.

"If it helps curbing the cost obviously it's a good measure," says Alpine's Laurent Rossi. "Now, it remains to be seen what the CFD to track reliability is, and I think we're not there yet, to the point that we can just get rid of the wind tunnel altogether.

"I guess at some point we might phase it out with progress of simulation," he continues, "but in the meantime it will probably rely on the measures that are in place now - the ATR and such - which are limiting the number of hours, which is already a step in the good direction."

"Banning the wind tunnel has been discussed for 2030, not earlier," adds Mattia Binotto. "That was the proposal. So, it's a long time from now to there.

"I think that all the teams are open to the discussion, and open to accept it eventually because it's a long time from now. Are we today ready to ban the wind tunnel... not at all.

"I think in general it has always been about design simulations and testing, and testing is still very important, whatever it is: aerodynamics, power units etcetera.

"I think that in terms of cost reductions, we are already reducing at the moment the hours in the wind tunnel, which is a step in the right direction. Banning it completely, if you would do it today, the testing would be on track and that would be even more expensive, rather than doing it in the wind tunnel.

"So I don't think the times are mature today for a decision," he admits. "I think it's right to discuss it but I think the testing is part of our normal engineering process, so for today, it's important to have the wind tunnel, and let's see how much simulation will develop in the future."

"It's a topic I brought up a few months ago," reveals Christian Horner, "to say take a longer term view because a wind tunnel isn't particularly efficient. It's not very environmentally friendly, and with the world evolving in simulations, the tools, the way that CFD is evolving so rapidly, for example, the Valkyrie was developed... it never went in a wind tunnel once during its whole development phase.

"If you take a 10-year view on this, so it's far enough out that these effectively dinosaurs of machinery that are heavily consuming electricity and power become a thing of the past.

"Formula 1 should be the cutting edge of technology - we're seeing more and more investment from the tech sector, so why not be the showcase for that tech.

"With Formula 1 I think if it is something like 10 years away, then there's a glide path towards it that every team knows it's coming and you adjust your investment over the period of time accordingly."

"I think it's a very complicated and difficult discussion," argues Jost Capito. "When the time is evolving, when you see the technology and digitalisation has evolved in the last ten years. Ten years ago you would have never imagined where we are now and this technology is evolving even quicker.

"Just to say 2030 is the time to ban wind tunnels; it needs discussion, is that the right timing, yes or no, but these kind of technology discussions have to happen within the FIA Commission and we have to look forward.

"Sustainability, for sure, is very important for all of us but it's more than just wind tunnels. When you look at computing, it needs a lot of energy as well, so we have to look at all the details and then come up with a well-thought and agreeable decision on that.

"At the moment, I think we all use wind tunnels and it's all still a very important tool and we also run more efficiently because the wind tunnel time is reduced so for us, I can say we run it very efficiently but the future with definitely be different but how the future looks, I think it's too early to say."