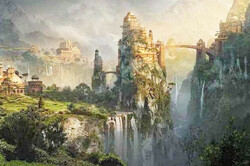 A new season dawns, with Titans awakening across the globe to once more battle, with tingling speeds, suffering tyres, and brittle diffusers. When better, dear reader, than to turn to the classics for a guide to form, as we pray this season is set to be deemed a mighty classic worthy of legendary status?

Kubla Khan, by Samuel Taylor Coleridge. Or, a vision in a dream. A fragment. The conflict!

The poem. Rush. Frankie Goes To Hollywood, myth and history lost one within the other, ELO, oh, and that movie...

In Xanadu did Kubla Khan
A stately pleasure-dome decree:
Where Alph, the scared river, ran
Through cavern as measureless to man
Down to a sunless sea.

What dreams are floating down the scared river Alph right now? Jaguar, all electric by 2025. Well that's one clear engine choice revealed by some dreamers within the automotive industry. I personally hope it works out well for Jaguar Land Rover. Their first electric SUV, the iPace, is a very fine item. Quality finish, reasonable looks - for an SUV - and enough pace to go with the space and grace to keep the majority of folk happy, and the toddlers in the rear pinned into their kiddie seats by impressive G-force loading.

If only the effective range was a bit more than three laps of the Aldi car park.

The fine second hand example I enjoyed examining had a modest 3,000 or so kilometres on the clock. The previous owner loved it, but found the claimed range, and the real world one - especially if said driver took the liberty of using some of that pace - was as vapid as a misty dream of distant Xanadu.

F1 is yet to issue decree on the next generation of power plant, but too heavy on the fossil fuels and they will accelerate us all to a sunless sea.

So twice five miles of fertile ground
With walls and towers were girdled round;
And there were gardens bright with sinuous rills,
Where blossomed many an incense-bearing tree;
And here were forests ancient as the hills,
Enfolding sunny spots of greenery.

Ah Xanadu! We need to go back, before even Bernie was a boy, to the fine year of 1797 when Samuel Taylor Coleridge penned Kubla Khan, subtitled Or, a vision a dream. A Fragment. A pleasure Dome, caves of ice, and the river Alph. Sounds like one of Chase's business plans does it not?

The walls and towers of both Liberty Media, and the FIA are glistening in the brave light of a promised new dawn. Twenty-three races, a packed schedule which one might opine was the result of one too many incense-bearing trees, to thrill the brave souls who, rather than being enfolded in spots of sunny greenery track-side, are more likely to be huddled alone in front of a glowing LCD screen, alone, be-masked, and anti-socially distant.

But oh! That deep romantic chasm which slanted
Down the green hill athwart a cedar cover!
A savage place! As holy and enchanted
As e'er beneath a waning moon was haunted
By woman wailing for her demon-lover!

Lord, there's enough in the start of this next verse to fill ten thousand Liberty Media conferences, or mystic investor calls! Ask Romain, or Daniel and they will tell you of how fast paradise can transmute into a savage place. Crashes in the first instance are best survived, and then should act as education for the intellects who dance with Miss Physics, dream-like, both asleep, and awake. It is holy work to keep our gladiators safe from mortal blows. It is enchanting to watch these gladiators joust with each other, with over-watch by the eternally even-handed Miss Physics, up, down, and around the green hills of earth.

Waning moon, and wailing women sounds to me like track owners howling in the night. Which is a spectral ritual I do not expect to cease any time soon. Embrace by demon-lovers would probably be appealing to many of the track owners compared to the terms Liberty is offering for the continued “honour” of hosting a race. If F1 is to avoid being the go-to Sport Washer of Choice for demagogues across the globe this is one haunting that could do with a robust exorcism this season. Maybe, just maybe, the right tracks will become holy and enchanted places once more.

And mid these dancing rocks at once and ever
It flung up momently the sacred river.
Five miles meandering with a mazy motion
Through wood and dale the sacred river ran,
Then reached the caverns measureless to man,
And sank in tumult to a lifeless ocean;
And 'mid this tumult Kubla heard from afar
Ancestral voices prophesying war!

Five miles out indeed! Looks like that is not far enough to remain safe within the realm of the Pleasure Dome. War? Well on-track battles are a war we are all hoping will ignite this season. Tyres wars are a myth from the past, while oil-gate, diffuser-gate, Vettel-gate, and Multi-21-gate, are all wars we'd rather not see in a red-eyed apocalyptic dawn.

We are assured lifeless oceans if we continue with fossil fuelled movement, so the Oil Fat Cat War is going to rage awhile longer until the gallant knight Sir Musk and his band of merry fast chargers win the war for conveying consumers hither, and thus. Panasonic, and Toyota are promising a new generation of fast charging, high energy density battery technology by year end, so with luck we could soon be careening silently through wood and dale on a newly electrified sacred river.

The shadow of the dome of pleasure
Floated midway on the waves;
Where was heard the mingled measure
From the fountain and the caves.
It was a miracle of rare device,
A sunny pleasure-dome with caves of ice!

Dear reader could this be the dreamed of heaven-on-earth future F1 we all see but only in dreams! A sunny pleasure-dome with caves of ice! It must be a new theme park in an Arabian Gulf state with each of the world's mighty, historic, tracks faithfully recreated under the one towering, climate controlled, crystalline dome! Mile after mile of hallowed tarmac perfectly rendered, maintained, and accessible. A living dream. Watch a different historic race, or a new round of F1 combat week after week from within your divine Pleasure-Dome!

A damsel with a dulcimer
In a vision once I saw;
It was an Abyssinian maid
And on her dulcimer she played,
Singing of Mount Abora.

Well Grid Girls vanished many seasons ago, and thankfully other, bizarre announcements at the presentation of drivers have also been blissfully assigned to history. Yet Liberty Media has increased the concert content of race weekends, mostly to the delight of fans. Singapore and the US Grand prix at the Circuit of the Americas have made the best Pleasure-Dome musical delights. Not so sure that Taylor Swift will be using the dulcimer to accompany herself while crooning of Mount Abora, but in the world of modern music anything is possible.

That with music loud and long,
I would build that dome in air,
That sunny dome! Those caves of ice!
And all who heard should see them there,
All all should cry, Beware! Beware!
His flashing eyes, his floating hair!
Weave a circle round him thrice,
And close your eyes with holy dread
For he on honey-dew hath fed,
And drunk the milk of Paradise.

As long as that music loud and long is not the new theme tune, this is not looking too bad for a vision of season 2021. Wander with the mad immortal man! Yes, that does sound like time spent in a Case Carey investor briefing! Coleridge wasn't a track owner was he? This closing section has echoes of fears and warnings that could apply to so much this season.

Vettel trying for one last flash of inspired divine driving. Lewis seeking to make his legend immortal, having supped long, and full on the milk of Paradise. Every design mind across all teams - other than Mercedes - each night closes their eyes with holy dread as they settle for unquiet slumbers with the curves of the Mercedes circling around their minds... twice... thrice, crafted by angels, delivered by demons.

It's a dead-heat tie for flashing eyes and floating hair. Is that Toto in a lazy haze of smug easing down the pit lane, or Christian with a fresh barb fit for the Bard ready to fire, and flashing with defiance?

All should cry beware! Indeed so. Circuit owners, promoters, shareholders, fans, every driver, yes, every driver, even Lewis can be taken off the track by an errant wing, or clumsy late dive. For us the fan? We wander, mouths hung open in the crystalline caves of ice that are the ethereal halls of all the legend that is Formula One. Hold your breath and listen. There, over that dale, you can still hear Sir Stirling chuckling, Jim Clark, and Colin deep in friendly conversation. Floating on that scared river, the shark nose Ferrari, The six-wheel Tyrrell, The twin chassis Lotus... Walking over the hill, 'neath the cedar cover, why I think it is Ascari, Fangio, and Senna sharing an eternal moment.

That history, those legends, the glistening arc of paradise forged each season in the passion of on-track battles, and off-track genius. Frozen immortal in the ice halls of our collective memory for evermore. Season 2021 will unfold as it should, with each actor playing his part to write a few more poetic lines of legend for future mortals to recall in hushed wonder. The outcome? Why only Kubla Khan, and Bernie, know how this season plays.

So enjoy advancing into the soon to be discovered future once more dear reader! Our Xanadu is the towering dome, and the scared river. Poem in our hearts, Geddy Lee's battle soaring lyric delivery ringing in our ears. Chase, and Todt? Well if you step outside our Pleasure-Dome, walk around the back past the Elves' parking garage, and the Tooth Fairy's recycling bins, under a stuttering street lamp, in a dark and odour-filled alley, you will find cardboard boxes marking the outline of a small make shift roller skating rink. Here you'll find them both, fitfully rolling around to ELO's Xanadu both dressed as Olivier Newton John (that's not their natural hair, sorry, both using wigs). That is their eternity as mad immortal men. Welcome, and Adieu season 2021.

(I've not quoted the entire poem, I've left some lines out. Interested readers can find the full text here - my thanks to Samuel Coleridge for not spinning too loudly in his grave over my co-opting his fine poetry)