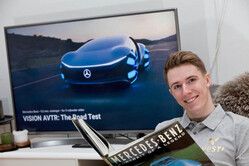 Mercedes has announced that Danish F3 driver, Frederik Vesti has been recruited to its junior driver programme.

Vesti, who was born in Vejle in 2002 and has been racing since he was eight-years-old, has joined the Mercedes-AMG Petronas F1 team's junior programme as a new signing for the 2021 season.

"I've dreamed of being a Mercedes junior and worked so hard for it, for so many years and that motivation has lifted me every single day," said the youngster. "To now be working with Mercedes, the best team in the world, is a massive boost for my career and I am really looking forward to building a powerful relationship in the future.

"I admire Mercedes so much for their mentality and their hard-working attitude, which has helped them become so successful. They choose their junior drivers very carefully, so I am really excited to be part of the programme, working with them and developing as a driver. Thank you to Toto and the team for their trust in me and my future."

Racing is in Vesti's blood, as his father previously competed in rallying and owned a team in Danish Formula Ford.

After claiming back-to-back Danish Karting Championships in 2013 and 2014, in the Cadet Junior and KFJ classes, and winning the WSK Final Cup in KFJ in 2015, Vesti moved up to single-seaters the following season in Danish Formula Ford with his father's team, finishing fourth in the standings with two wins.

In 2017 he advanced up the single-seater ladder to Formula 4, competing in the Danish and ADAC series. He finished runner-up in the Danish Championship with eight wins and seventh in the ADAC standings with one win, remaining in the latter series for 2018 while also joining the Italian F4 grid for three races – winning two of them. Fred finished fourth and 10th respectively for Van Amersfoort Racing in the ADAC and Italian F4 standings and also made his Formula 3 debut that season, with three races in the European Championship and also an outing at the famous Macau Grand Prix.

The Danish youngster moved into Formula 3 full-time for 2019, where he went on to win the Formula Regional European Championship with frontrunners Prema. He claimed 13 wins from 24 races to take the title in impressive style, leading to his move up to FIA Formula 3 in 2020.

He remained with Prema to race in the F1 support category and in his rookie season, claimed three race wins and one further podium appearance to end the year fourth in the standings – with the most feature race wins of any driver in 2020. He will remain in FIA F3 for a second season in 2021, moving to ART Grand Prix.

"Fred's commitment and dedication is something we love to see and hugely respect," said Gwen Lagrue, Driver Development Advisor for the Mercedes-AMG Petronas F1 Team. "I remember him sending me updates on his debut seasons in single seaters and letting us know details of his progress, which is something we always appreciate.

"His Formula Regional European Championship in 2019 was impressive and in FIA F3 last year, he was very consistent. We are happy to welcome him into the Mercedes family and look forward to seeing him fight for the title this season in FIA F3!"