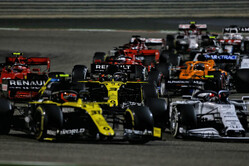 Racing, however, took a secondary concern today following two separate incidents in the Grand Prix. The first involved Haas F1 Team Driver Romain Grosjean, who crashed heavily into the safety barriers on the first lap. The second, shortly after the race was restarted, saw Lance Stroll's Racing Point car flipped on its head.

It was far from plain sailing in the 57-lap race for the team with positions swapping and changing throughout with many drivers committing to multiple pit-stops after the second restart.

Daniel pitted on lap 17 for Hard tyres and again on lap 37 for the same compound as he finished in seventh place. Esteban - after a quick start on the second restart - pitted for Mediums on lap 18 and again on lap 35 for Hards, which took him to the end. Both drivers duelled on track momentarily with Daniel able to pull away to chase down sixth place. His efforts fell short as the race finished under the Safety Car after a problem for Sergio Perez with Esteban holding on to ninth.

Daniel Ricciardo: "Firstly, I'm glad Romain is OK after the incident. The result today does not matter so much after that and it's a bit of an afterthought. To see him escape and walk away was a relief and I wish him the best in his recovery. That's the main thing from today. In terms of our race, it certainly wasn't what we wanted but we gave it our best and we still managed to score points. We'll focus on next week when it comes, it's still to play for in the championship and we'll come back stronger."

Esteban Ocon: "The first, and main thing, is the news of Romain [Grosjean] and I wish him a very fast recovery. It was a crazy incident. The team told me in the car that he was alright, but looking at the images, I struggled to believe it. It's a miracle that he's fine and I'm glad to hear he's OK. Our race was secondary to that incident today. We have plenty to review from the race as the McLarens were a bit quicker than us. We'll push on see what we can do next weekend on the shorter layout and try and claim some points back."

Cyril Abiteboul, Team Principal: "After a very promising qualifying with both drivers into the top ten on Medium tyres, Daniel starting sixth and Esteban seventh, this race is clearly disappointing. We lost positions during the two starts, the first with Esteban and the second with Daniel, which hampered our race and impacted our strategy with early stops. In the second stint, both cars failed to find the pace and we will have to understand why. By the end of the race, Daniel was on the pace again and would have finished sixth without the safety car intervention. The final result of this weekend is not up to our ambitions and we need to regroup very quickly for the last two races. I also wish Romain a speedy recovery after this terrible accident and I hope to see him back behind the wheel before the end of the season."