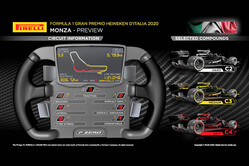 At Monza, the 'temple of speed', the same compound selection has been made as last year: C2 as the P Zero White hard, C3 as the P Zero Yellow medium, and C4 as the P Zero Red soft. These are the tyres that sit right in the middle of Pirelli's F1 range, covering a wide spectrum of conditions.

This choice has been made to suit the varied characteristics of Monza. As well as its famous flat-out straights, there are some slower and more technical sections that have been added to the iconic Italian track over the years to try to contain average speeds.

Like Belgium, Monza is another race whose original 2020 date hasn't been moved - and past experience has shown that it can be extremely hot at this time of year, towards the end of the Italian summer.

Monza is one of the classic venues on the Formula 1 calendar, where top speeds close to 360kph are seen thanks to teams running minimal downforce to avoid drag down the straights. The trade-off is that there's less aerodynamic grip through the corners, meaning that the cars then have to rely more on mechanical grip from the tyres. With less downforce pushing down on them, the tyres are more susceptible to sliding - which increases wear.

If the weather isn't warm, another effect of the long and fast straights at Monza is to cool the tyres down - meaning that they might not be completely up to temperature for the following corners.

Last year's race was won with a one-stop strategy as Charles Leclerc sealed a popular home victory for Ferrari. Leclerc, who started from pole, was the only driver to choose a soft-hard strategy: the other one-stoppers all went for a soft-medium plan.

Mercedes driver Lewis Hamilton, who stopped twice, finished less than a second behind Leclerc - so a variety of strategies is clearly possible at the Italian race.

The overall lap record of 1m19.119s was set by Kimi Raikkonen in qualifying with Ferrari two years ago.

However, the fastest race lap at Monza still dates back to 2004, courtesy of Ferrari driver Rubens Barrichello. Could this be the season when that 16-year-old benchmark finally gets broken?

Mario Isola: "For the first time in history, we embark on two consecutive Formula 1 weekends in Italy: each with different tyre nominations too. Unlike Mugello, Monza is very much a known quantity, with the teams having plenty of relevant data from these same compounds that were also used last year.

"However, the cars are now a lot faster and the weather could also be a question mark: it's often warm and dry but there's been rain in recent years too. Both a one-stopper and a two-stopper can work, but unlike last year, the drivers now have a fixed tyre allocation that has a direct effect on the strategy by influencing which compounds they ultimately have available for the race. However, this allocation has been designed to give the drivers the maximum possible opportunities, so that they can target the tyres that they want to have on race day."