The Road to Relevance 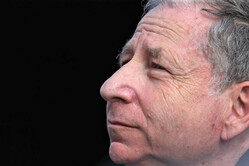 Another week, another FIA ban, dear reader. There are some things COVID-19 cannot stop.

Rejoice all ye calling for a return to 'normal'. Nothing makes one feel alive and falling in love with engineering all over again like the sound of another tablet of stone dropping from 'The Mountain' (aka F1 Towers - Ed) with the latest commandment lovingly chiselled into its surface.

"Listen and tremble all ye who hear me speak...!" One can imagine Todt intoning as he strides like an Old Testament God from the Mount into the world of mere super heroes, that is the Formula One paddock...

"Extracting performance by the application of emerging technology and brilliant thinking is hereby forbidden, in the realms of..." here he pauses for dramatic impact as eyes widen behind a hundred pairs of Ray Bans, Persols, and Vintage Gucci's, "in the realms of... energy recovery, and software trickery!"

In an over done puff of smoke, and with a surround sound clap of thunder he vanishes as swiftly as he appeared.

Across the engine manufacturer's offices dozens of engineers look at the stone tablets freshly thrown upon their desks, and tracing the rough cut letters with their fingers let out a group sigh, and roll their eyes, face planting firmly into dry cool hands, as yet another brilliant item of technology and progress is resoundingly quashed by the Gods who must be obeyed.

Yes dear reader. The FIA is now stopping the cars from being increasingly efficient and effective by managing engine modes and recovering additional energy, just because the technology and thinking is moving on faster than the FIA can legislate.

Tablets of stone and feet of clay versus minds of the mighty, and technology of the genius. It would be amusing if it were not so tragic.

Mazda won Le Mans in 1991 with the Quad-rotor 26B engine powering the stunning 787B race car. A stunning first victory for a Japanese manufacturer. And how did the FIA react to this act of genius? It promptly banned the Rotary engine from competition. Good-bye the excitement of a title defence.

This history of stifling innovation and progress in the name of ever increasing prescription within the rules is supposed to make us, the motorsport punter and car purchasing public, believe that Formula One is leading the way in competition, and delivering genius outcomes for road cars. I mean, really.

Many Porsche road cars have movable aero surfaces to improve driving dynamics. Even the road going aircraft carrier that is the Range Rover adjusts ride height based on speed.

The Kia Stinger, a turbo charged crazy sedan from Korea at a bargain price, has launch control, traction control, fly-by-wire controls, software engine mapping, and a self-tuning exhaust system. Coupled with the boost-crazed turbos, is there anything on this car that is allowed on a modern Formula One car, and remember this is Kia's first major performance sedan ever, and they are usually known for cheap and cheerful entry-level cars. Oh, and you can alarm four friends at a time with your driving, so useful room for humans too!

Would a Kia Stinger (or Porsche, or Range Rover for that matter) benefit from Formula One derived energy recovery that is at the cutting edge of tomorrow, or are they better supported by yet more rigid rules on the banning of software and other features common to our everyday lives, away from the race track?

As an aside, Pirelli tyres that struggle to make 100Km, well I'm glad I get a few more Km out of my road tyres than that! Yet more genius rule making.

Yes, Lance Armstrong got an advantage from the drugs. But two important points... First, cycling at that speed around France and up and over both the Alps and the Pyrenees is really hard work and hurts... a lot. One still has to pedal the entire way, having completed a stunning amount of pre-season training. Second, as Lance has highlighted, all except one of the other riders that stood on the podium with him each year he won has also subsequently been done for drug cheating. All except one! The point being they were all on the juice, and yet Lance still won. They all had access to the same 'cheat'.

So... we remove party mode for all teams. No more of that for anyone. Well, I'm confident each engine manufacturer had their own version of 'Party Mode' for qualifying, or during the darkest hour of need for scant use during the race. Yes, some might have been better than others, but I'm sure they all existed. So now, as Lewis has already quietly noted, the outcome might well not be what the FIA expect.

I believe we will see a drop of performance across the field in qualifying in terms of ultimate pace. Not much, but 'Party mode' will, well... no longer be coming to the party.

Will this dramatically alter the pecking order for "Awesome Engines" across the field? Is the Renault about to bury that lump of junk from Mercedes? Really dear reader, really? Of course not!

Was Lewis forced to use party mode again and again as he lapped the entire field bar his team mate and Max Verstappen at Barcelona? Of course not! Did Max *not* use a party mode while chasing? Do those in the midfield not mix a quick twist of party mode with DRS to launch that dive down the inside?

No, and no again. As His Supreme Being Todt strides forth with stone tablets flying in all directions, the engineers shake their heads, comment out a few lines of code, run some simulations on how much the baseline setting can be increased now the maximum attainable over a weekend has been reduced (total area under the power graph), and they will all line-up on grid at the next race with maximum power a fraction reduced, but otherwise business as usual with a tiny bit of additional power permanently dialled into each engine. Net impact being nothing at all!

Expect Mercedes to maintain its qualifying advantage. Expect DRS overtakes to reduce in marginal circumstances (due to no added party mode). Expect Max to have a bigger gap between him and Lewis, to the world champion's advantage. Expect the midfield to be a no-overtaking zone earlier in the race because no one can get an edge exploding from the apex of a slow corner.

In short expect - as usual - that the FIA has once more issued tablets of stone that stifle innovation, fail to improve the racing, and continue to ensure you can find more advanced technology on road cars, even affordable road cars from budget Korean manufacturers, that is more awesome than that allowed by the FIA within the "Pinnacle of motorsport".

Look out for surround sound thunder and overdone dry ice mist, for these foretell yet another flurry of hastily chiselled stone tablets capturing rushed rules to the benefit of no one, most especially the demi-god fearing motorsport fan.

Hopefully Lewis still has Bluetooth and wi-fi in his cockpit so he can listen to quality driving music, and relax while the field behind him aspire to not sideswipe each other into the (burning?) bushes in fruitless overtaking attempts supported by wooden wheels, steam engines, and the speechless quality of FIA technical thinking.