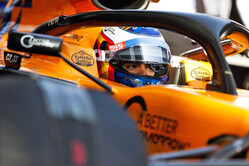 Unable to 'film', far less test, ahead of next week's season opener, McLaren is heading into the unknown in Austria and beyond.

Having finished best of the rest last year however, team boss, Zak Brown fears his team will be hard-pressed to maintain its position this time around, feeling the biggest threat in what promises to be a hard-fought midfield, will come from Racing Point and Renault.

"I do think this year is going to be tougher," he told Sky Sports. "Racing Point are clearly very quick with what appears to be last year's Mercedes, and one would think it would be quick because it won the championship! They're going to be very tough and I think they made the most off-season progress.

"Renault were very quick, Alfa were quick," he continued, "AlphaTauri put in a very quick time at the end of testing and Williams showed a lot more pace than they did last year.

"Hopefully our car's strong," he added. "We were happy with winter testing but that midfield is going to be tighter than ever. I think it's going to come down to reliability, drivers continuing to do a good job, team executing, because I think there's not much pace difference between the cars."

With Mercedes and Ferrari taking a number of updates to Austria, Brown reveals that his team has focussed more on spares, though updates will be forthcoming at future events.

"We'll be bringing some toys as often as possible," he said. "But because of the frequency of racing, we've probably been focused more on spares than updates. I think a lot of the teams are because we're going to be doing three races in a row on the trot."