Q&A with Kvyat and Gasly 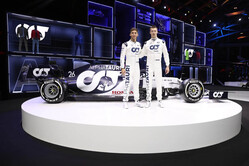 Daniil Kvyat and Pierre Gasly look ahead to the new season.

How excited are you to be racing for Scuderia AlphaTauri in 2020?
Daniil Kvyat: "I'm very excited to go racing again. This is going to be my sixth year in Formula 1, which is a fantastic feeling. Even though technically speaking, the core of the team stays the same, the name has changed with AlphaTauri stepping in. But while the team and the car will have a different look, technically, the AT01 is pretty much an evolution of last year's STR14, which already worked well. Having that as a starting point, our aim is to improve it and move forward as much as possible."

Last year was incredibly successful for you. For this season, what are your personal goals you'd like to achieve?
DK: "I wouldn't say there is anything in particular. You can always improve yourself, so I'll keep working on that and my personal improvement as a driver, try to get as many good finishes for the team in order to help secure a good position in the championship. 2019 was a good year for me, with ten top-10 finishes and a podium finish in Hockenheim, so it's definitely a year to remember, but there's obviously room for improvement. I wouldn't say I've set myself any specific targets for this year, I want to keep doing what I was doing, but better."

Do you think that a top-five finish will be achievable for the team overall?
DK: "You always want to improve on the previous season. Considering how tight the midfield battle was and not knowing if and how we have all progressed it's impossible to predict, but I expect a big show on track and we want to be leading the midfield pack. We should just try to perform well at every race and that will bring us a strong season like it did last year."

The season is incredibly busy - 22 races, 7 weekends back to back when you have a race. There's going to be lots of drama.
DK: "I think it should be a really exciting season for the fans and for us drivers. There were many dramatic races last year. I think now with the field being so competitive and so tight at the front and in the midfield, we're going to have some races where there's going to be a lot happening. I hope that trend is going to stay because there may be some opportunities for us to grab some bigger points. Let's see how we handle 22 races, in what's going to be the longest season in F1 history."

There are two new races - one in Vietnam, one in Holland. What are you expecting from those tracks?
DK: "I'm looking forward to the two new venues in Holland and Vietnam. I've raced at Zandvoort in my junior days when I was competing in Formula Renault 2.0, so it will be good to go back there. Vietnam looks like a very interesting configuration. I would expect something similar to Baku. At every street circuit there can be a lot happening, so it should be fun."

You are 25 years old now. Do you feel like you're coming into the prime of your career now?
DK: "I think I'm working hard to come into my prime. Every year I always find something new that I can work on and improve, it's a constant evolution of myself. I feel like last year was a good year for me in terms of personal discoveries, understanding what works for me and what doesn't. I think in terms of my performance, I feel like I'm always quite happy with what I manage to squeeze out of the car, but I think it's very hard to identify your prime. I'll keep working on my personal improvement as a driver and try to get as many good finishes as I can."

Are you expecting a super close battle with your teammate Pierre this year?
DK: "I think so, that's how it usually goes between teammates. Last year, I had two during the year and both of them are very competitive, very fast guys. Pierre is a very competitive and fast driver, so of course I expect it to be close."

The start of last year was complicated for you, but your season ended in great style. Do you feel stronger because of it?
Pierre Gasly: "2019 was an interesting year as a lot of things happened, both on a professional and personal level. I feel like I grew and learned a lot, so to get that second place in Brazil, Toro Rosso's second best result ever over 14 years in F1, really rounded the season off in the best possible way. I was very happy with the way we worked and the way things went and now, I'm more than excited about this new season, which I'd like to start in the same way in which we finished 2019."

Do you believe the team can keep that momentum going forward?
PG: "Definitely, as the team is pretty much the same as before and everyone is very motivated and focussed with a really good dynamic throughout the company and you can feel it in the factory. Everyone is very excited about the 2020 car and wants to do even better than in 2019."

It seems as though last year the team was really able to keep developing the car throughout the season. Was that an important factor?
PG: "It's a bit hard for me to assess the full evolution, as I joined the team mid-season, but overall it's true that, between Daniil and I, we regularly picked up points in the second half of the season. I believe the way the team went about developing the car improved a lot, even from 2018 to '19. The working methods and the way we approached the race weekend was clearly a step forward and it was a real pleasure to work with them. We are all on the right path for 2020 but we need to wait and see how pre-season testing goes. Having said that, last year's performance owed a lot to how we worked and so I believe we can continue in this dynamic way."

From your side, have you also evolved a lot? Have you still got a lot to learn?
PG: "There is always something to learn. This will only be my third season in Formula 1. I feel better prepared than last year, as I have a bit more experience. Towards the end of the year, together with the people in the team, we really discovered how to understand what we needed from each other and how to get the most out of our package. We must continue to push and it will be important to perform consistently, scoring points throughout the season. We have to seize every opportunity, just as we did last year."

Of the four drivers in the Red Bull family, you are the one with the longest history with Honda. How did the relationship evolve last year and what do you expect from them this season?
PG: "It's really impressive what Honda did last year, starting with their first win since they returned to Formula 1 in 2015. It proves that all their hard work over the past years has been rewarded. For me, getting that podium with them, as a midfield team, shows that Honda has really helped us to grab these opportunities. They have continued to work very hard, to bring us even more power, so it's very promising. They are great to work with and we share the same goals with everyone giving their maximum effort."

We are about to tackle the longest season in the history of F1. How do you feel about that?
PG: "I love racing and it's what makes me happy, so this looks like being a really exciting year. It's true that it's going to be a very busy season, but I see that as an additional opportunity to get a good result. I just want it to start now. I'm impatient!"

Any thoughts on the new name for the team?
PG: "One of the many reasons why I decided to move to Milan is that I like fashion a lot, so I'm more than happy for the team to partner with AlphaTauri. I can't wait to see and wear the new team kit, which I'm sure will be a big step in quality, fit and comfort. I know the brand and their approach to what they do so I'm really excited. For the team, a new story is just beginning and it's a pleasure to be involved right from the start. The team stays the same, so it will be important to give AlphaTauri a good start in life. It's exciting to see what lies ahead of us."