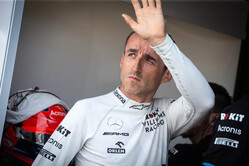 No matter what the record books might suggest, the fact is that Robert Kubica proved the sceptics wrong.

A false start with Renault, saw the Pole head to Williams, initially as reserve and development driver - a role that usually means hours and hours in the simulator as opposed to 'the real thing' - before being given the opportunity to actually race this season, alongside rookie, George Russell.

Many had doubted not only Kubica's ability to compete but even whether he could physically deal with the demands of tracks like Monaco, given the appalling injuries he suffered in a rally crash in early 2011.

But not only is the Pole one of only three drivers to have finished every race this season, he is Williams sole point scorer.

Though out-qualified at all 15 races by Russell, who has usually finished ahead on Sunday afternoon also, one should not forget that the Briton is one of the clear rising stars on the 2019 grid, having won the GP3 and F2 titles back-to-back, and surely to move to Mercedes at some point in the next couple of seasons. He is not 'your average' rookie.

All that aside, as he considers the next phase of his career, the Pole admits frustration at being unable to truly mix it with the opposition this season.

"I put a lot of energy, and I think this year it doesn't really show," he says of his return to F1, according to Motorsport Week.

"I would say I'm not paid back by results and all other stuff," he continued. "I think my effort was much more than what we were capable of achieving this year. So I would say I'm pretty confident that if I get in the right place in the right car I can still deliver.

"I'm not racing since 2010," he says. "If you think about, it depends, what you mean, racing... I don't want to sound harsh but of course we are racing, it's not we go out and bring the car around the track, actually this year were probably tougher ones than when you were racing in top positions.

"But wheel-to-wheel, on the same level, I haven't raced since 2010 because even if we get a chance of being around other cars, like it happened on the last two races, we have two big disadvantages.

"I always said Formula 1 changed a lot depending on which row you are starting, it's like different racing."

Looking ahead to life outside F1, even though he has been linked with a simulator role at Haas, he said: "I don't think there is a lot of different championships that in the end, I might end up.

"If I tell you a couple more it's easy to call or easy to think which possibly they might be, but as I said I think for now I'm honest, I'm concentrating on this year, of course, I made my decision as I said that in August I would have a think and would make a decision.

"First of all was to decide if there is a chance of continuing with Williams if I want to stay or not, as you know it's not that I keep it a secret, I decided not a long time ago and it came to your knowledge, so probably it will be very similar with my plans for next year.

"Sometimes it takes longer, sometimes a bit less time, but I think if you have on both sides of the table people who want to have an agreement and decide, but first of all you have to make your own decision and then move from there."