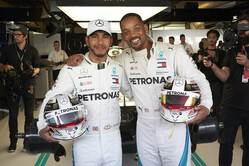 Pirelli has revealed that for the season ending Abu Dhabi Grand Prix, which takes place at the Yas Marina on December 1, the C5 will comprise the soft tyre, while the C4 and C3 are the medium and hard respectively.

This is will be the fourth time this season that this particular combination has been used, having been the choice for the Monaco and Canadian Grands Prix, and will also be used in Singapore.

In 2018, the compounds available were the hypersoft, ultrasoft and supersoft, while in 2017 it was the ultrasoft, supersoft and soft.

Last year's race was won by Lewis Hamilton, who ran a one-stop strategy, as did sixteen of the seventeen finishers. Indeed, the only driver in the top ten to stop twice was Hamilton's teammate, Valtteri Bottas who was struggling with his supersofts.

Each driver must save one set of the softest of the three nominated compounds - in this case C5 - for Q3 and this set will then be returned for those who qualify in the top 10, but the remaining drivers will keep it for the race.

Each driver must have both race sets - the C4 and C3 - available for the grand prix.

The teams are free to choose the remaining 10 sets, making 13 sets in total for the weekend.