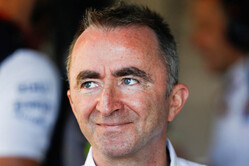 Paddy Lowe, who has been on an extended leave of absence since March, is leaving Williams and will step down from the board of directors with immediate effect.

"After a period of careful reflection I have reached the decision that I will not return to work at Williams," said Lowe in a brief statement.

"I wish all my previous colleagues the very best to meet the challenges ahead, which I am sure they will do. I would especially like to thank the Williams fans who are so supportive."

"We understand and respect the decision Paddy has reached and wish him well for the future," added Claire Williams.

Just days after pre-season testing, which saw Williams miss the first two-and-a-half days because the car wasn't ready, there was speculation in the media Williams had parted company with Lowe.

Asked about the speculation, Lowe told reporters: "I haven't paid attention to those sort of subjects in the media. I'm working very hard, there's an awful lot to do. We're working well as a team and at all levels in the company. I haven't got any concerns on that side."

When the FW42 finally hit the track, it was soon clear that there was much work to do, other than being off the pace, a lack of spare parts meant that the final afternoon was spent practicing starts and pit stops.

Coming off the back of the Grove outfit's worst season in living memory, the shortcomings of its 2018 car in terms of balance, handling and poor aero becoming apparent just a couple of hours into pre-season testing last year, 2019 was meant to be a step forward.

However, in Australia, George Russell admitted to a "fundamental issue" with the car which he said would take months to fix.

After 8 races, though the team has no problems with reliability, it has yet to score a point, neither driver coming anywhere close to making it beyond Q1.

Lowe, who began his F1 career with Williams in 1987, joined McLaren in 1993, progressing to the role of technical director in 2011 before replacing Ross Brawn at Mercedes in 2013. In 2017 he returned to Grove.

The Grove outfit subsequently turned to team co-founder Patrick Head, who has been helping out in a consultancy role.

"It hasn't really changed from when he first started," said Claire Williams at the weekend. "As everybody knows, we asked him to come on board after Paddy's leave of absence. He is literally a consultant for the team. He comes in one or two days a week. If he can't do that, he dials in and he joins the technical management team in their meetings and is literally just acting as a guide, as a sounding board and really helping everybody out. So it's really nice to have him back around the place.