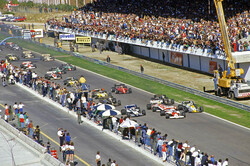 With the engine regulations not looking likely to undergo significant change for 2021, and the manufacturers now anticipating the next likely overhaul of the rules in 2025, it has been revealed that in anticipation of the original 2021 regulations Porsche built a potential F1 unit.

For as long as anyone can remember there has been talk of Porsche returning to Formula One. The legendary German manufacturer first entered the sport in 1961 with its F2 car, returning a year later with the purpose built 804, which, in the hands of Dan Gurney, gave the company its sole F1 win as a constructor.

Similar to the nightmare that beset Honda's initial return to F1 with McLaren in 2015, Porsche’s return to F1 in 1991 was a disaster, the Footwork Arrows regularly failing to even qualify. Late in the season the team switched to Cosworth and Porsche left F1 never to return.

Over the years that followed there was talk of a return but in early 2015 Porsche’s head of development, Wolfgang Hatz ruled out a return, claiming that Le Mans was more attractive.

"Formula One has never been an issue for us and won't be," he said. "Le Mans is a more attractive environment for us - there are more and more competitors and we learn more about the production of road cars.”

Just over two years later and there appeared to be a change of heart, when it was revealed that Porsche, along with Cosworth and Aston Martin, had attended a meeting of the Power Unit Working Group, and was just weeks away from making a decision on whether to return to F1.

Two months later, and having announced the termination of its LMP1 programme while at the same time confirming its foray into Formula E, deputy chairman, Lutz Meschke met with F1 bosses at Monza as the German manufacturer continued to mull a possible return to the sport.

"F1 could be one of the right places," Meschke told Autosport. "As you know, Formula E is very important for us now, and F1 is always a good topic to think about. And I think we are in quite good discussions regarding the new engine."

Asked if the plans for a more basic twin-turbo V6, which would see the controversial and expensive MGU-H dropped, might make F1 more attractive to Porsche, Meschke said: "Absolutely. We have to cut costs in F1, and it's a good way to reach this target."

However, he insisted that his company, which is part of the VW Group, had no intention of returning to F1 as a constructor, merely as an engine supplier.

However, his comments came at a time VW Group director, Bernhard Gobmeier, appeared to rule out F1, claiming that the sport was on a "dangerous path",

"It is expensive," he said, according to Motorsport.com. "Most of the teams, apart from the big four, have financial problems. And tracks cannot pay what they are asking for. Due to its expensive nature, they are walking a very dangerous path in my personal opinion. We see it everywhere.

"Mercedes has over 1,500 people working on the F1 project," he added. "That is not even considering the suppliers, though it is not so much. It is probably 2,000 people on two cars. You should consider how expensive wages are in England and how expensive material is.

"In America, they have cost control on their minds. They manage it well. In Europe, there are a lot of different categories. In some of them, cost control is really good. But, F1 is completely out of range and so is the WEC.

"MotoGP is above F1 from the show point of view. It is one hundred times better. There is no comparison. MotoGP, its supporting races and World Superbikes are way better than F1."

However, it has now been revealed that prior to its exit from LMP1, Porsche had begun work on a potential F1 power unit.

"In 2017 there were signals from Formula 1 that the regulations were to be changed and that energy recovery from the exhaust gases was no longer required," Porsche's head of motorsport Fritz Enzinger tells Motorsport.com referring to the original plan to drop the MGU-H

"As of 2017, Porsche was a member of the FIA Manufacturers Commission and was involved in the discussions about the future drive strategy in Formula 1 from 2021 and represented at the meetings.

"On the one hand we took part in these working groups. On the other hand the guys developed a six-cylinder for the WEC in parallel. Of course, we thought about what would have to change if the engine were to be used in Formula 1. Such things can be done in two ways.

"At the end of 2017, we received a concrete order from our parent company to further develop a highly efficient six-cylinder engine, despite its LMP1 withdrawal," he reveals. "Not only on paper, but actually as hardware and with the idea that this engine will be put to the test in 2019. That was the order from the board to us."

Admitting that the unit is "complete and running on the test bench" overseen by a team of "20 to 25 technicians", "for analyses and further orders with regard to series relevance", Enzinger adds. "The possible use for this six-cylinder engine was completely open. If it had been decided to send Porsche 2021 to Formula 1, we would have made it the way we did in 2018."