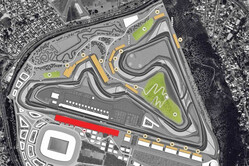 It was revealed on Tuesday that Rio de Janeiro's city hall had appointed the US-based Rio MotorSports group to build the circuit which is to be located in the Deodoro region of the city.

Rio MotorSports, which was the only bidder for the contract, subsequently respondsed, issuing a statement confirming it will build and operate the track for 35 years.

The cost of construction is estimated at £135m and will appearently come from the private sdector.

However, while Interlagos has a contract for the Brazilian Grand Prix that ends after the 2020 event, officials in the city are ramping up their effort to keep the race in Sao Paulo, among other things citing Brazi President Jair Bolsonaro's close ties to Rio. Indeed, it was Bolsonaro who jumped the gun earlier this month saying that the race was mobing to Rio in time for the 2020 race, a move subsequently denied by F1's commercial boss Sean Bratches.

Federal prosecutors in Rio tried to suspended the tender for the circuit on grounds of environmental issues, but the bidding continued nonetheless, with the proviso that Rio MotorSport meets regularly with the various environmental departments to keep them up to speed.

The circuit, which has been co-deigned by Hermann Tilke will be located on land provided by the army, which, it is understood, has cleared the area of any unexploded devices.

"The proposal we brought to Rio seeks to present a design of a modern track, dynamic and full of emotion," said Tilke, according to Globo Esporte. "At the same time, we think of a multidisciplinary space that allows a very wide range of use in other sports, serving every community in the region."