Cry Me A Stream 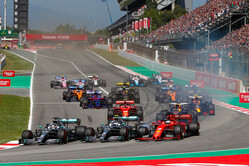 Like salmon swimming upstream to spawn, Chase and his school of fast swimming fish appear to be confounded that no matter which direction they swim, the tides and eddies are always swirling against them.

2021 rules and a new Concorde Agreement to sort with ten lovingly cooperative teams. Mercedes being an unstoppable force of nature. More overtaking in your local graveyard than on any given race weekend. Circuit owners sulking at all points of the compass... The list goes on.

Then a personal favourite of mine, Miss Physics insisting on existing in every corner of the universe. Not just end-plates and vortex creation, but even in the cheery realm of digital media. Come with me on another adventure in swimming with the F1 Sharks as they seek to eat Chase and his school of (plump and juicy) salmon...

Liberty is keen to push a pay-per-view (PPV) model of subscription, and move most of this subscriber base to its own digital channels. This locks viewers in as a fan-base, and enables Liberty total control over content. The idea being to lock people in with unique content, that Liberty grow over time, for additional fees from the viewers. It will be interesting to see how this cannibalisation of its own fan base plays out. Indeed selling the fan base first to a PPV service provider and then, once they are hooked on the content, sliding them all over to its own F1-TV channel is just the sort of move Bernie would have pulled off...

Yet, right now, as many have noticed Liberty is making a dog's breakfast of the timing app, and F1TV is failing to deliver even across the modest number of launch countries where one can access the feed.

We have recently completed the Pitpass Tour de Force beer-mat powered maths analysis of the overall revenue possible to generate from F1 (The Tower of Fable), so now we are going to take a modest left turn and look at the sorts of figures one needs to agree with Miss Physics when she is wearing her "Digital Communications" hat.

First some ground theory and a few numbers.

Blue Ray disks in high definition (HD) have an uncompressed data rate around 20 to 30 giga-bits a second (20-30 GB/Sec). When they are spinning in your disk player this information is processed and a signal sent to your screen, usually over cables, and you delight in a detailed picture and fine surround-sound. The pipe down which you are pouring your data is all in your control, and all in your viewing room (or at least within your house).

Not all this massive available bandwidth (the size of the pipe) is required for top quality HD pictures and sound (the 'water' you are trying to pour down the pipe). There's plenty of room left for other data (such as alternative angles to view a concert from, narration, other languages, subtitles etc.) The current HD transmission standards call for around 2 GB/Sec for a top quality picture.

Now 4K (Ultra-High-Definition, UHD) and 8K (Super-Hi-Vision) require much more bandwidth, and will be the standard for broadcast within the next few years.

When this wizardry comes to you over the internet the entire bandwidth issue becomes a Big Thing because it is not whizzing down short distances (less than fifteen metres, or around fifty feet is considered 'short' for most audio visual cable runs) of cable within your control, it is rushing over massive networks, around the planet, bouncing off satellite relays and all sorts.

This aspect of digital communication is most robustly policed by Miss Physics with a veritable army of laws, constants, constraints and all manner of calculator melting maths.

Those cheeky engineers (Yes, it's us again...) at communications companies and stream services (such as HBO and Netflix) have been wearing out all their best dancing shoes, as they waltz Miss Physics in pirouettes they can cope with to get you Game of Thrones, Downton Abbey, or the Kardashians in the delightful, timely, HD your heart desires and your 21st century eyes crave.

Due to a nifty bit of communications theory one can apply what's known as compression to the data so that one does not need to provide the full bandwidth to get a good HD picture. Compression can be lossless, which means when you reassemble the picture it is exactly as intended, or it can, well, have 'loss'. All the internet services use compression that removes data from the original picture and never gives it back to you. This is why an HD Blue Ray disk, or a 4K disk, will always provide a better picture than a current streaming service.

If one considers Darth Vader lurking in Death Star shadows, or the Game of Thrones Battle of Winterfell episode (pick any dark scene you care) with the full HD picture, on a correctly calibrated screen, one will see endless nuances in the dark shades. Vader's cloak, will not simply be a "Big Black Thing" it will be a flowing living surface, of texture, and varying 1,001 shades of black, grey, blue/purple and all those amazing colours one sees if one actually goes and looks at real life.

If we stream the same scene from (say) Netflix over a 25 mega-bits a second (25MB/Sec) connection and we freeze the frame we will not see all those variances in subtle dark tones. Vader's cloaks will now be a "Big Black Thing" and all the subtle visual delights will have been flattened out in the name of saving bandwidth. They also "Pixel Drop", removing picture elements, as you move from the centre of the viewing screen to the edges, as most action happens near the centre, and they know that not that many of us spend time staring at the bottom right edge of the screen looking for coffee cups (Gotcha, GoT...).

In this manner they remove much detail from the picture, and do the same with the sound, but unless you go looking for it, you mostly do not miss this ultimate grand detail. Obviously if you're also watching on a poorly calibrated screen and/or a small one, such as a smart phone or tablet, the picture is so small and indistinct that a full UltraHD picture would be impossible to pick from one with far less detail.

This is a Formula One site, get to the dang point Noble! I hear you cry...

To summarise; First, streaming HD is not HD, compression and tricky software has been used to get the size down so a 25MB/Sec internet connection can cope with "HD visuals". Second, the internet is a massive, complex global communications network of many, many complex parts. The internet is our "Pipe", our data is our "Water". Network bandwidth defines the size of your pipe, defining how much space is available to tip the water into, while the "bandwidth requirement" tells you how much water you want flowing within your pipe.

Recently Chase again delayed F1TV, which is proving a troublesome fish to swim up-stream. At F1TV HQ the engineers are wearing-out their dance shoes so fast I'm sure their toes are burning as they try and waltz Miss Physics around the dance hall. Miss Physics is insistent on all her laws being kept, and her constraints being met.

Why the communications lesson and dancing fish Max? I hear you ask. Well a fine HD picture in your room streaming Ultra-HD at 30 GB/Sec down ten feet of quality cable is easy. Streaming it from your letterbox, or your neighbour's cable feed (!), likewise easy. Compressing it and firing it all around the world to millions of subscribers? Well now it gets much more difficult.

Game of Thrones suffered some network issues because so many people wanted to watch all at the same time. This is an issue because the internet communications infrastructure has to be shared globally by all users. HBO said the last episode of GoT set a global viewing record of 18.4 million viewers. 18.4 million and they had issues running over a known fixed network! How does Chase think he is going to handle 500million...!? While you personally only need 25MB/Sec for a reasonable HD picture, so does every other viewer. Now our personal 25MB/Sec pipe size needs to be scaled-up to allow for all the watchers requiring 25MB/Sec. Ouch.

For Game of Thrones the streaming service can distribute digital copies ahead of time around the globe on many powerful servers. For example they could have ten servers spread across the USA, another ten spread across Europe, a few in Africa, a few dozen sprinkled across Asia, and a couple each for Australia and New Zealand. Then, when we all go to stream Game of Thrones, our service provider works out the nearest, least busy server to which to connect us, and, usually, we can sit back and cheerfully watch the show, unknowing and uncaring about the remarkable feat of communications engineering and software sneakiness making it all possible by placating Miss Physics at each turn of her demanding dance.

Some hiccups can happen, and excessive demand can cause network or server congestion that result in poor viewing or a loss of service, but these are generally not too difficult when one can pre-distribute the content to many servers located closely to the local viewing audience.

This solution is not available to a live sports broadcast. It is by definition live, and therefore cannot be distributed to many servers ahead of time. Using another go-to example of mine, the Mayweather Pacquiao fight. 4.5 million global viewers. That was the entire paying audience. If one takes 4.5 million and multiplies by 2.5MB/Sec one has a grand total of 112,500GB/Sec. In simple terms we are trying to get Niagara Falls to fit through a pipe around the size of a Starbucks coffee cup. Folks we are going to have some spillage.