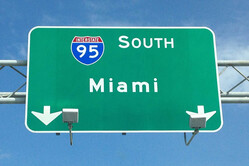 Almost from the day it bought the sport, Liberty Media has made no secret of its desire to expand Formula One in its own backyard, with events in numerous iconic American cities being targeted.

However, at a time Vietnam remains the only all-new addition to the calendar, hopes of bringing Miami on board for 2020 have taken a further knock following the deferment of a vote on the race.

With no issues concerning the funding of the event, which would be hosted on a controversial revenue sharing basis - a move which has upset most of the other current race promoters - it is the objections of local residents and businesses that threaten the race.

With the track due to run down palm-tree lined Biscayne Boulevard and pass through Bayfront Park, last June, a group of Bayfront Park residents sent a cease and desist order to Miami’s City Hall demanding that it stop negotiations over the race.

Shortly after, F1's commercial boss, Sean Bratches confirmed that plans for a 2019 race had been scrapped, as he revealed that F1 had "decided, in consultation with the Miami authorities, to postpone sign-off until later in the summer, with the aim of running the first Formula 1 Miami Grand Prix in the 2020 season".

At the end of September, the Miami City Commission was due to vote on whether to approve the contract for the race and its organiser Stephen Ross, billionaire owner of the Miami Dolphins NFL team, however the vote was indefinitely deferred, with a spokesperson for the City of Miami revealing that there was a six-month window for the Commissioners to vote again.

The vote was due to take place on 28 March, just before the deadline ran out, but as The Independent reveals this vote was subject to yet another delay.

The minutes of the meeting reveal the vote "was deferred to the May 23, 2019 Planning and Zoning Commission Meeting", and while this still offers some hope, the fact is that even if approval is given this would mean an incredibly tight deadline if the event were to be included on the 2020 schedule.

In its bid to win public support, last year F1 hosted a fan festival in Miami on the run-up to the United Stated Grand Prix at the Circuit of the Americas in Texas, featuring a street demonstration of F1 cars, a line-up of supercars and a garage - which was located in Bayfront Park.

FOM claims 80,000 spectators attended the event, compared to the 100,000 that attended the festival in London ahead of the 2018 British Grand Prix.

Should the event get the red flag it would be a serious blow to F1's owners who have been seeking to add more American races to the calendar at a time five of the existing events, including those at Silverstone and Monza, are in the final year of their contracts.

On the day that it is revealed that F1 bosses had been in serious talks to take the sport on to the street of Cardiff - yes, Cardiff - the loss of the likes of Silverstone and Monza would not only compromise the image of the sport it would hit it where it hurts, in the pocket, for the loss of these races, together with Germany, Mexico and Spain, would mean around £100m less in the coffers.