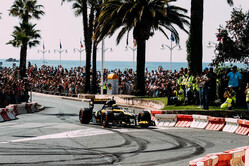 The team will take the excitement and passion of F1 to 15 cities across France, starting with two demonstration runs at Disneyland Paris on 6 and 7 April.

The roadshow is the curtain-raiser to the French Grand Prix, which will be held at Le Castellet on 23 June.

The Renault-powered E20 Formula 1 car will then tour the country, taking in cities in the north and south.

Driving duties will be split across team's race driver line-up of Daniel Ricciardo, Nico Hülkenberg, Sergey Sirotkin and Jack Aitken, while the Renault Sport Academy drivers will also take turns behind the wheel.

Adding to the excitement, Renault's breath-taking GT racer, the Renault R.S.01, will join the E20 on the roads, while the public will have the opportunity to watch live pit stops, try out driving simulators and Batak pro challenges and meet the Renault drivers.

"We are pleased to join forces with the French Grand Prix to bring the excitement of Formula 1 to the French public for a second consecutive year," said Cyril Abiteboul. "The success of the roadshow last year was unprecedented, with thousands of people attending each demo run. This year with a larger programme even more people can discover and experience the sport for themselves."

"By participating in this national roadshow programme, we offer our dealerships and their clients privileged access to exceptional events," added Philippe Buros, commercial director France, Groupe Renault. "It makes our commitment to Formula 1 meaningful and will enable as many people as possible to experience it first-hand. It is also an opportunity for us to show our support to the French Grand Prix."