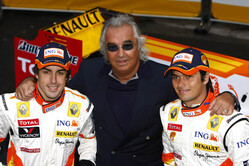 It was a season that had everything and more...

From the remarkable story of a team being saved at the eleventh hour and going on to win both titles, to threats of a breakaway series, the aborted return of a legend, and a spectacular fallout to one of the worst examples of cheating in the sport's history, 2009 was a truly remarkable year.

It's surprising to think all the above took place close to ten years ago, and so it provides a perfect opportunity to examine that season's events in more detail. Strap yourself in, because we're travelling back in time to the winter of 2009...

After a remarkable end to the 2008 season, which saw Lewis Hamilton claim his first world championship on the last corner of the last lap of the final race of the season, F1 was about to see the start of a manufacturer exodus. Following two dreadful seasons where Honda languished at the back of the grid, the Japanese manufacturer dropped a bombshell and announced it was quitting the sport with immediate effect, citing the global financial crisis and costs involved in F1 as reasons. It left Jenson Button and Rubens Barrichello without drives, and looked to be the end of their time in F1.

No-one knew for certain what would happen. Rumours of potential buyers for the team were the subject of forum discussions for weeks. But in the meantime, the sport continued as normal. The remaining teams began unveiling their radically different looking cars for the new season. 2009 saw a major rules change, which resulted in cars with wider front and narrower rear wings, the reintroduction of slick instead of grooved tyres, and, for the first time, something known as the Kinetic Energy Recovery System.

Less than a handful of teams started with the latter, however, and not long into pre-season testing it became apparent that the previous title heavyweights, McLaren and Ferrari, had got things badly wrong. Perhaps they had focused too much on KERS, or maybe it was the previous year's down-to-the-wire championship battle that resulted in them taking their eye off the ball. Whatever, their cars were significantly off the pace of the leading contenders.

So too was BMW. The German manufacturer had taken the baffling, and ultimately incorrect, decision to focus on its 2009 car at a time it had been in championship contention the year before.

To confirm that this would be a wildly unpredictable season, teams which had previously made up the midfield, such as Red Bull, Williams and Toyota, suddenly looked the ones to beat.

And then, with the clock about to strike midnight, the former Honda team was saved with a management buyout led by Ross Brawn. The imaginatively named Brawn GP turned up at Silverstone for a shakedown with a predominantly white car, unadorned of sponsor logos. From there, the team re-joined with the rest of the paddock for the final pre-season test at Barcelona and promptly went quickest.

The cynics in the paddock were quick to downplay this. Brawn GP was simply conducting low fuel "glory" runs to top the timesheets, in a cynical attempt to attract more sponsors, it was claimed. Some speculated that they'd struggle to score any points throughout the season. Only those behind the scenes knew how good things were really looking for the team.

Consequently the sense of shock was palpable when F1 arrived in Melbourne for the first race of the year, only for Brawn GP to lockout the front row of the grid in qualifying. From there, Jenson Button went on to claim only his second F1 win, and first for close to three years.

Due to some late race carnage involving Sebastian Vettel and Robert Kubica, Rubens Barrichello made it a memorable one-two. Third was reigning World Champion Lewis Hamilton, who had started from P18.

However, after it emerged that McLaren had advised him to withhold information in a steward's inquiry, following an incident with Jarno Trulli behind the safety car, an apologetic Hamilton was disqualified.

It was not the only early controversy of the season, however. Albert Park proved to be no fluke, and Jenson Button started an incredible run, winning five of the next six races. The rumblings of discontent from rival teams grew stronger with every pole position and race win - which they claimed was down to the Brawn being fitted with a "double diffuser" - a controversial device that Toyota and Williams also had.

The majority of the grid felt it was illegal, but, following an investigation, the FIA ruled otherwise. Brawn's rivals were left to play catch-up, yet the championship looked like it was only ever going to be won by one man: Jenson Button. As he thrived, Barrichello toiled - even going so far as to suggest that the team were favouring the Briton over him.

Events on track were about to be overshadowed by another of the year's stories, which blew up just in time for the British Grand Prix. Despite being publically embarrassed over allegations about his private life published in The News of the World the previous year, Max Mosley - the FIA president - still clung to power like a limpet to a rock.

He suggested, not unreasonably, that Formula One should be cost-capped in light of the financial crisis. The majority of the grid, which formed the Formula One Teams' Association (FOTA) vehemently disagreed, with the exception being Williams, which was promptly excluded from FOTA for its disobedience. As the FIA began the process of recruiting new teams for the proposed cost-capped series, FOTA announced on the Thursday before the British Grand Prix of its intention to form a breakaway rival series for 2010. It was dubbed by some as "Formula Teddy out the Pram".

All this led to a bizarre atmosphere at Silverstone. The track already faced an uncertain future, due to F1's planned switch to Donington for the following year. Max Mosley and Bernie Ecclestone were booed by fans whenever they appeared on the big screens, while 'Wild West' style posters were printed, claiming that Mosley and Ecclestone were wanted "dead or alive", with the reward being "the return of a sport". Meanwhile, Mosley was interviewed on the BBC, where he re-iterated his view that FOTA were a bunch of "loonies".

Attention returned momentarily to the racing when everyone realised that Jenson Button's glorious homecoming wasn't going to be quite so glorious after all. His run of four straight wins ended as he laboured to sixth place, the Brawn suddenly not as invincible as it had been previously.

The victor at Silverstone was Sebastian Vettel, who earlier in the season had claimed Red Bull's first ever F1 win at a sodden Shanghai. The Silverstone win added credibility to the belief that the Austrian team was now Brawn's main rival for the title.

That was further backed up at the next race in Germany, where Red Bull won again. However, this time, it wasn't Vettel who stood on the top step of the podium. His teammate, Mark Webber, was by then seen as something of a journeyman in the sport, having not won a race previously in six years of competition in F1.

Initially it didn't look like he'd win in Germany either. He claimed an imperious pole position the day before, but looked to have blown his chance within seconds of the lights going out on race day. A clumsy collision on the run down to the first corner with fellow front-row starter Barrichello earned him a drive through penalty.

But Webber would not be denied, and by the time the chequered flag fell he'd made up for his earlier misdemeanour with a highly popular maiden win. It was a remarkable success; given only a few months earlier he had badly broken his leg in a cycling accident and was not sure if he'd even race in 2009.

It was a sombre paddock that arrived in Hungary for the next race. Only the previous weekend, Henry Surtees, the son of 1964 F1 world champion John Surtees, had been killed in an F2 race at Brands Hatch after being struck by a wheel from another car. Things were about to take a serious turn in F1 too. Despite Ferrari's dog of a car in the F60, the 2008 runner up, Felipe Massa, had continued to drive well. But on a qualifying run, he was hit on the head by a spring from Barrichello's car and left with injuries that nearly claimed his life. The two events restarted a debate about extra head protection for drivers in open cockpit cars.

Massa's season ending injury meant Ferrari was solely reliant on Kimi Raikkonen in Hungary. But questions regarding the Finn's motivation, following a subpar 2008, continued and rumblings had begun that Ferrari was looking to terminate his contract early. His rumoured replacement was Fernando Alonso, who was being held back by a poor Renault.

Hungary turned the formbook on its head. Alonso had claimed pole position in weird circumstances after the timing system failed in Q3 and left drivers unsure of where they'd qualified. Brawn's bizarre form continued, while McLaren finally got itsr act together. Following a series of improvements to the car, Lewis Hamilton capitalised and took his and McLaren's first win of the season after a long few months in the wilderness for the British team.

As the sport began its summer break, Ferrari's immediate concern was who would substitute for the injured Massa. Then, yet more extraordinary news: Seven-time World Champion Michael Schumacher would come out of retirement to drive for the fabled squad. Not long after being 'unmasked' as The Stig on BBC's Top Gear, Schumacher had seemingly been bitten by the racing bug again.