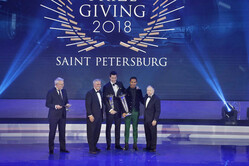 The stars of world motor sport gathered in the Grand Hall of the historic St Petersburg Philharmonia last night for a glittering evening celebrating a host of remarkable sporting achievements. The highlight of the annual gala was the presentation of the FIA Formula One World Drivers' Championship Trophy to Lewis Hamilton.

The Mercedes driver made history this year in becoming only the third driver to claim five championship wins, matching the legendary Juan Manuel Fangio and closing in on seven-time title-winning great Michael Schumacher.

Hamilton took a total of 11 victories during the year, finished off the podium on just three occasions and only once missed out on points across the campaign's 21 races.

The Briton was pushed hard for much of the season by chief title rival Sebastian Vettel, but four consecutive grand prix victories after the sport's traditional August break handed Hamilton a commanding championship lead and at the Mexican Grand Prix fourth place was enough to seal a remarkable fifth F1 crown with two rounds in hand.

The Formula One Constructors' title, meanwhile, went to Mercedes for the fifth consecutive time.

"This has been our most challenging season so far and put all of us to the test," said Toto Wolff. "We all had to raise our game, each and every member of our team. The fact that we ended up winning both titles is a testament to the incredibly hard work of the entire team.

"I am very proud of this accomplishment and I feel honoured to receive this trophy on behalf of everyone in Brixworth, Brackley and Stuttgart who helped to win these Championships.

"Did I enjoy the battle with Ferrari? No, I didn't, it's really tough," he admitted. "But If I look back, I wouldn't have done it any other way. It's what Formula 1 is all about. It's the pinnacle of motor racing and you expect your competitors to be very strong. In the end it makes the end result even more enjoyable.

"One of the great things about the FIA Prize Giving Gala is that the event brings together so many different motorsport Champions. Huge congratulations to everyone who fought hard to receive a championship trophy tonight - well done!"

"It does feel incredible," said Hamilton, who had missed the official news conference after complaining of feeling unwell. "I've just signed for another two years, so I'm excited about the next couple of years.

"Next year's going to be so tough, the seasons are getting longer and longer," he added. I don't know how long I'm going to go, currently two years sounds good for me. But I still love racing so maybe I'll be going a lot longer. Who knows?"

Ferrari drivers Sebastian Vettel and Kimi Raikkonen, who finished runner-up and third in the driver standings were present, the Finn, looking to have taken full advantage of the 'liquid refreshments' on hand.

"Kimi has enjoyed tonight... a lot," said the MC as the Sauber-bound driver was spotted clambering over the stage furniture after picking up his award and having appeared to stumble as he first walked on to the stage behind Vettel, who was sporting a Mansell-style moustache.

A number of special FIA awards were also handed out in St Petersburg.

The Rookie of the Year prize, voted for by members of the FIA Drivers' Commission, and sponsored by Your-promotional-code.co.uk, was won for the second year in a row by Formula One star Charles Leclerc.

The Monegasque picked up the 2017 award for his march to last year's Formula 2 title and this time out Leclerc was handed the award for the quality of his transition to the top level, Formula One.

Competing with a Sauber team that was returning to competitiveness after a fallow period, Leclerc managed to finish in the points on new fewer than 10 occasions, scoring a best result of sixth place behind the drivers of the sport's top three teams at the Azerbaijan Grand Prix. His outstanding 2018 performances were rewarded with a 2019 step up to Ferrari alongside four-time world champion Sebastian Vettel.

The Personality of the Year award, voted for by permanently accredited media from the FIA's major championship, was also presented to Lewis Hamilton.

Toto Wolff and the team's Non-Executive Director Niki Lauda won the President's Award for their efforts in securing a fifth consecutive Formula One Constructors' title. The achievement makes Mercedes only the second team in F1 history to reach five titles in succession, with arch rivals Ferrari recording six-in-a-row from 1999-2004. Wolff was on hand to collect the award from FIA President Jean Todt, as Lauda continues his recuperation following major surgery.

"He sends his regards, he is recovering very well," said Wolff of Lauda. "Next time he's going to be here."