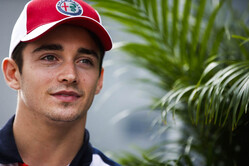 A tight-knit start made spectators' and team members' hearts race faster, with both of the team's drivers giving consistent and strong performances on the opening laps.

Heading into the race on hypersoft tyres after qualifying on them in Q3 yesterday, the challenges of the demanding Autodromo Hermanos Rodriguez quickly made it clear that it would not be pure speed, but tyre management and retention of positions that would be the key factor to success - not only for the Alfa Romeo Sauber F1 Team, but for all teams across the grid.

Charles Leclerc and Marcus Ericsson started from 9th and 10th spots on the grid respectively with a one pit stop strategy, determined to score points. The first stint was crucial in terms of strategy and tyre management, and both drivers did an excellent job of extracting the maximum performance. Both Charles Leclerc and Marcus Ericsson continued to progress, maintaining the strong pace into the second stint, recovering important positions and finally finishing the Mexican Grand Prix weekend with a very successful race result.

With a total of 36 points to its tally, the Alfa Romeo Sauber F1 Team has gained a position in the Constructors' Championship, advancing to 8th place today. Charles Leclerc is in 15th (27 points), and Marcus Ericsson in 17th (9 points) place in the Drivers' Championship.

Marcus Ericsson: "It is a great result for the team today - getting both cars into the points is a great effort which has allowed us to advance by a position in the Constructors' Championship. I am very proud of my race and think that it was one of my best performances in Formula One. I had to fight hard to manage my tyres, I had to recover many positions after the pit stop and I didn't make any mistakes, so I am satisfied with my result."

Charles Leclerc: "It was a good race and I am happy with my result, a P7, which is my second-best result so far in Formula One. It was challenging to manage the tyres and the race was quite demanding in that respect. It was a good team effort and we scored enough points together to advance in the Constructors' Championship. Overall, a positive result, and I hope that we will be able to have a similar next race in Brazil."

Frederic Vasseur, Team Principal: "It was a positive Grand Prix for us with strong progression throughout the weekend. We had Charles and Marcus in Q3 and today they both scored points and the team gained a position in the Constructors' Championship. The race was tough, and all drivers struggled with their tyres due to the challenges of the circuit. Both Charles and Marcus did an excellent job in tyre management, and could retain their positions which ultimately resulted in a successful outcome for the team. We have to keep pushing to finish the season on this note, and will fight for another good result at the next race at Sao Paolo."