It has been called many things, the "operations centre", "virtual garage" or "mission control", most of those designations, however, are actually a misnomer and somewhat misleading, as they don't really caption the essence of the room. Which is why Mercedes calls it the "Race Support Room"

Up to 60 team personnel will work on the cars in Suzuka - the maximum number of technical staff the FIA Sporting Regulations allow to be "associated in any way with the operation of the cars within the confines of the circuit".

Outside those confines, however, more people can support the race team in ways that don't require physical access to the car. For Mercedes, these people sit in the Race Support Room or more commonly referred to as the "RSR".

The Race Support Room has a maximum capacity of 30 people. The majority of whom are volunteers - industrial placement students who choose to give up their spare time to support the race team.

In addition to those volunteers, there are also engineers from various departments - tyre, systems and race engineers as well as aerodynamicists and strategists. Finally, the RSR is also a training facility for young team members aiming to join the race team.

One of the most important jobs of the industrial placement students is listening to the radio messages from the other teams. This form of eavesdropping was made possible in 2016, when the teams opted to bring back the chance to give engineering support to the drivers over the radio - a form of communication that had been banned for the 2016 season and left the drivers without any support when they encountered a technical issue.

The people in the RSR also look at the various video feeds to see the race from as many angles as possible. If, for example, there's contact with one of the cars, they will find the right video snippet as quickly as possible and send it over to the aerodynamicists, so the footage can be analysed and checked for possible bodywork damages.

There are a number of tasks that are only done in the RSR. For example, all video clipping and audio transcription is done in the RSR. In addition to that, the vast majority of the overload monitoring is also exclusively done back at base in Brackley.

RSR personnel are also responsible for measuring pit-lane times which are important for strategy calls. The strategists in the RSR support the strategists at the track and provide input and background information to help make the right calls. However, the final strategy decision is always taken on the pit wall at the track.

If you're training to become a trackside engineer, the RSR will usually be the first part of your training. You'd spend at least a year working in the RSR and getting track experience during testing before you're sent out to the track for a race.

Beyond this "on-the-job" training though, the RSR also helps develop young graduates and placement students by using a learning session called "Racing 101". It's a meeting held on Sunday morning before the race and it is used to answer every possible question one might have. There's just one fundamental rule: there are no stupid questions!

Some might think that being away from the track a big disadvantage for the RSR personnel, but it's actually an advantage. The fact that the people in the RSR have no way of physically working on the car gives them a clear focus. They can look at the bigger picture and analyse how the team is doing relative to the competition.

They also look at various systems on the car and see if they're working the way they're intended to. If something is not working as planned, help is not far away - especially on Friday, when the factory is fully staffed: the RSR is right next to the Design Office, where they can always talk to the person who designed the part.

There are also systems engineers in the RSR who look after the reliability of the car and will monitor the data from specific systems. They check, for example, suspension loads when the car is going over a kerb to make sure the loads were not too high and the suspension was not damaged. If a systems engineer finds evidence in the data that clearly indicates that a system is about to fail and the car becomes dangerous to operate, he will inform the chief engineer who is responsible for the safety and reliability of the car and has the authority to make the call to box the car if needs be. 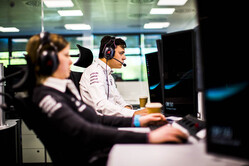 The RSR crew gets access to the full telemetry data within one second of it being available trackside. At the same time, the engineers at the track also have access to all the data that is created in the RSR. Over the course of a race weekend, about 120 Gigabytes are sent from the track to the RSR and about the same volume of data in the other direction. The RSR also has access to the same radio messages as the personnel at the track and receive them with only minimal delay. The latency for a European race is about 0.3 of a second. For the race in Australia, the delay is about 0.7 seconds and for the upcoming race in Japan it will be about 0.5 seconds.

The team uses a dedicated room, which is built as a theatre with everyone facing the same direction, giving them all the chance to work on their individual tasks on the three screens in front of them and seeing more general information on the big screens that make up one wall of the facility.

The main screens will display the on-board and pit lane feeds, a timing page and race analysis software. Each seat in the RSR is fitted with an intercom panel, giving everyone access to the radio channels he or she requires for the role. While this form of communication is key to reaching the right decisions, it is also quite tricky to get used to at first. When the team invites guests into the RSR, they have the tendency to take their headsets off initially because they're overwhelmed by the radio traffic on the roughly 30 channels the team uses.

There's a very similar room at Mercedes-AMG High Performance Powertrains (HPP) in Brixworth, although that one is referred to as the TSO - which is short for "Track Support Office".

The people at the TSO not only look after the Power Units in the Mercedes, but also the engines in the Force Indias and Williams.