Horner hits out at Renault 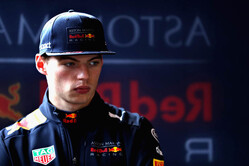 Max Verstappen's (understandable) expletive laden outburst as he slowed to a halt just 5 laps into today's Grand Prix probably took the words out of the mouths of just about every single member of his crew.

Told by his engineer to park his Red Bull, which had been running fifth at the time, the youngster replied: "Can I not just go ahead and **** it.

His frustration was shared by team boss Christian Horner, as Verstappen's failure marked the team's seventh DFN of the season.

"I am not going to get drawn into saying too much," he told Sky Sports, "but we pay multi-millions of pounds for these engines, for a first-class product, a state-of-the-art product, and you can see it is quite clearly some way below that.

"So it is frustrating," he added. "That is what it is. We still have Daniel in the race and I will let Cyril come up with his excuses afterwards."

Next season sees Red Bull switch to Honda power, however, there remain nine more races with Renault. In Brazil last year, with Toro Rosso having announced its switch to Honda, there was a heated row between the Faenza team and the French manufacturer following Franz Tost's suggestion that as his team was dropping Renault is was essentially being given a sub-standard service.

At one stage the row almost saw Renault withdraw its supply there and then but for once Helmut Marko actually stepped in an calmed the situation.

With those nine races remaining, we could yet see more fireworks.

Having completed just 82.4% of this season's 1,494 race laps, the only team to suffer worse reliability thus far this year is... Toro Rosso.