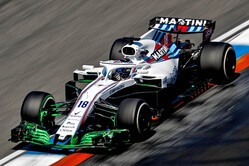 Following the nightmare of Silverstone, Williams admits to being "encouraged" following the introduction of its new front wing.

At its home race the Grove outfit suffered the indignity of seeing both its cars start from the pitlane after the team suffered a DRS-related phenomenon which saw Lance Stroll crash out of qualifying and teammate Sergey Sirotkin subsequently spin off.

In its quest to solve the balance issue which has plagued the team all season, Williams has introduced a "completely new" front wing this weekend. At the end of the first day, which saw the drivers complete 143 laps in total, initial results were encouraging.

"It was a pretty good day," said Paddy Lowe. "We conducted a very thorough programme in FP1 with a lot of data flow measurements and flow visualisation... at one stage the car was almost completely painted green," he added referring to the flo-vis.

"The programme was extremely well executed by the team both in preparation and execution," he continued. "We’ve adopted the front wing for the rest of the weekend, as it did everything intended and we obtained positive comments from the drivers.

"So yeh, a lot to analyse,” he admitted, "but the feedback so far is pretty good, so an encouraging start."

"There are some interesting things to look at," added Sirotkin. "I mean we never said this is something which gives us a lap-time on its own, but we do see some good improvements.

"It definitely gave us a more stable base, and a more stable airflow," he added. "That is what we can already see, even having not passed through the process of adaptation yet.

"From now on it is more about turning this more stable base into performance which, obviously not having this base before, we could not do in the past."