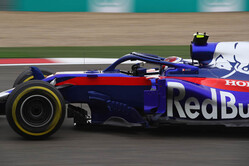 Pierre Gasly: "I'm super happy to be back in the points! We didn't expect to finish in the top 10 at this track as we struggled quite a bit with some issues and performance. I had a tough battle with Sergio towards the end of the race, I saw one chance in the last chicane which was really tight and we touched a bit, but in the end I managed to make the move. To leave Silverstone on a positive note is a great reward for the team after a difficult weekend, in which they have been working so hard. The car felt good today so I'm looking forward to getting back behind the wheel in Germany."

Brendon Hartley: "I'm not a believer in luck or superstition, but I think it's definitely fair to say that the last few weeks have been unlucky for me. It was all out of my control this weekend – the suspension failure yesterday in FP3, and another technical issue today before we could even start the race, so there's not too much to comment on the past two days. It's disappointing, but I'll hit the reset button now, take a couple of days to relax and prepare for the next race. I've got full trust that all of the people in Toro Rosso will be working hard over the next two weeks, as will I, to improve and show our maximum in Hockenheim."

Franz Tost (Team Principal): "We came here quite optimistic for a good result but unfortunately Silverstone was not the race weekend we expected. We had a big accident in FP3 with Brendon's car due to the failure of the left front suspension. We assume the lower wishbone broke, but as we didn't know what caused this incident, we decided to keep Pierre in the garage which cut his session short. As a consequence, it was very difficult for Pierre in Qualifying. Nevertheless, he did a good job to qualify P14 with just a handful of laps under his belt. As for Brendon, we had to change the monocoque on his car after the crash, therefore he had to start the race from pit lane. During the warm-up laps, we recognised a problem on his car which we weren't able to fully identify, so we called him back to the garage to try and fix the issue. Unfortunately, we had to retire him on the first lap, but I must make a big compliment to the team because yesterday at 8.30 in the evening Brendon's car was ready with the engine fired up. They put a lot of effort into this job so it was a big shame to see Brendon unable to race today. Pierre made a good start and showed a very strong performance, he kept his race pace consistent against our competitors and was able to finish in 10th position to bring home a point. After all of the troubles we had, it was great to repay the team for the hard work they have done this weekend – they really deserved this point. Now we look forward to the next race in Germany, where we can hopefully improve further on our results."

Toyoharu Tanabe (Honda F1 Technical Director):"This has been a very tough weekend, particularly for the Honda and Toro Rosso mechanics who had to work so hard in the limited time available, especially on Saturday after Brendon's accident, changing his PU and chassis and on Pierre's car changing the suspension. So it was a great reward for them that Pierre drove a determined race, never giving up, taking tenth place and therefore a point with two laps to go. Unfortunately, on the reconnaissance lap prior to the race, we could see that something was not right on Hartley's car. We tried to fix it and still sent him out, but it was clear there was a problem and we had to retire him. The problem has now been traced to a loose connector on the PU side."