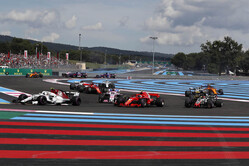 It was a good French Grand Prix weekend for the Alfa Romeo Sauber F1 Team, with Charles Leclerc finishing in P10 (1 point), and Marcus Ericsson in P13. In an eventful start to the race, Marcus Ericsson skilfully evaded an incident on track, gaining several positions during the opening lap. Charles Leclerc also progressed well, showing consistent and strong pace over the course of race. Both drivers did an excellent job in fighting with their rivals and defending their positions today. With another point to add to its tally, the Alfa Romeo Sauber F1 Team now heads to Spielberg to take part in the second of the three back-to-back races - the Austrian Grand Prix. For the third time in a row, the Alfa Romeo Sauber F1 Team performed the fastest pit stop of all teams.

The Alfa Romeo Sauber F1 team currently holds 9th place in the Constructors' Championship. In the Drivers' Championship, Charles Leclerc is in P14 (11 points), while Marcus Ericsson is in P17 (2 points).

Marcus Ericsson: "I am quite happy with my race. It was a tough weekend, and having started after only running in FP1 and qualifying, we did a good job in getting on the pace during the race. I made a good start and I was able to evade the incident on the first lap and to gain positions. After that, I struggled with the balance of the car and didn't advance as well as we hoped to. In the second half of the race, the car felt much better and things were running more smoothly. The tyres were working better, and I closed the gap to the competitors ahead. We also had a very fast pit stop again. Now, we have to make sure that we understand what happened at the beginning of the race and come back even stronger in Austria next week."

Charles Leclerc: "Overall, I am satisfied with the outcome of this weekend. I had a great qualifying result yesterday, and felt confident in the car. Having scored another point for the team during the race today feels great. It was fun to drive, and I had some good fights with the drivers around me. We are moving in a positive direction, and improving our performance week by week. I really look forward to seeing what is possible next weekend."

Frederic Vasseur, Team Principal: "It has been a positive weekend for us. We had good pace in qualifying, and increased our pace step by step. Today, both of our drivers fought in the midfield during the race, and we are making good progress as a team. It is important for us to keep pushing and stay in the fight with our direct competition in the races ahead. We feel confident for the next Grand Prix in Austria."