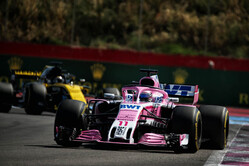 Sergio Perez: "It's disappointing to finish the race like this. We had a sudden drop in water pressure and had to retire the car. It's a shame because we had the opportunity to score a good amount of points and we leave empty-handed instead. I made a good start and kept clear of the incidents. I would have been eighth but Grosjean cut a few corners and got past me. We gave everything to try and get a result, but the luck wasn't on our side this weekend. We have upgrades coming for Austria and I hope they can make us more competitive for the next few races."

Esteban Ocon: "A very disappointing day. I made a good start and got alongside Romain [Grosjean] down the pit straight before he made contact with me. I was on the edge of the track but he moved over and hit me, which caused a lot of damage to the side of my car and the floor. After that, Pierre [Gasly] lost it under braking in turn three and hit me from behind, which ended my race completely. I feel very sad right now because I have been looking forward to racing in front of my home crowd for such a long time and it only lasted three corners. The fans here have been amazing all weekend so I have to say a big 'thank you' for all the positive energy they have given me."

Otmar Szafnauer: "It's not really been our weekend and seeing both cars retire from the race concludes a disappointing French Grand Prix. Esteban's race was very short and he was simply the innocent victim of other drivers' mistakes. The hit from Grosjean on the pit straight was totally unnecessary and unexpected, and caused significant damage to the floor of the car. Then being hit by Gasly caused even more damage and put Esteban out on the spot. Sergio escaped most of the opening lap carnage and was fighting for points until there was a rapid water pressure drop, which ended his race. We are still investigating the root cause of this issue."