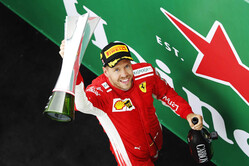 There was a mix of tyre strategies in play at Montreal, with three different teams on the podium and two different philosophies on strategy.

Ferrari's race winner Sebastian Vettel and Mercedes runner-up Valtteri Bottas both started on the ultrasoft and then switched to the supersoft at around the same time.

The two Red Bull drivers in third and fourth went the opposite route, carrying out a shorter first stint on the hypersoft and then switching to the supersoft for the run to the flag.Throughout the frontrunners' battles with their direct rivals, the timing of the pit stops was also an important consideration, with many drivers attempting an ‘undercut' in a close strategic duel. Haas driver Romain Grosjean, who dropped to the back of the grid after a problem in qualifying, completed an extremely long first stint on the ultrasoft before finishing just outside the points on the supersoft.

Mario Isola: "The strategy was really dictated by qualifying yesterday, with the early safety car period here also ensuring that a one-stopper became the way to go, on top of the low wear and degradation seen on this track generally. All three nominated compounds were used extensively during the race, with different thinking on strategy all the way down the grid. A number of drivers, notably Red Bull's Daniel Ricciardo and Haas driver Romain Grosjean were able to use strategy to boost their grid positions. The championship has now taken another twist, which makes it even more interesting as we head next to a completely new venue at Paul Ricard in France."