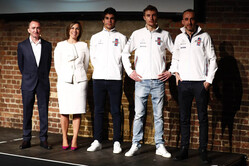 While it was widely felt the time was right for Felipe Massa to finally head off to the retirement home for F1 drivers, it was equally widely felt that Williams should opt for another experienced driver to partner Lance Stroll as he continues his apprenticeship.

However, despite a shoot-out involving Robert Kubica and Paul di Resta, and with the likes of Pascal Wehrlein and Daniil Kvyat also said to be in the frame, the Grove outfit finally settled on rookie Sergey Sirotkin, who heads to F1 with just the 2011 Formula Abarth European Series title and third place in the GP2 Series (twice) to his name.

Speaking at the unveiling of her team's 2018 contender, Williams team boss, Claire Williams, defended the choice of drivers, insisting that it isn't merely about the money they bring.

"We would only put talented drivers in our car," she said. "This is a dangerous business and we're not going to put someone in a car just because they come with money.

"Our decision-making process is so much more complex than just deciding to put a driver into the race seat because they have some cash," she continued. "Yes, we are an independent team and yes, sponsorship is really difficult to come by these days, so clearly if a driver has some financial backing then that is an added bonus, but it's not the foundation for a decision-making process at Williams."

However, the fact is that while Williams two drivers will line up on the Melbourne grid with just 20 F1 starts between them - all courtesy of Stroll - both come with plenty of backing.

"It is nothing new in Formula One that drivers come with money, and thank goodness they do," said Williams. "Santander has followed Fernando Alonso to every team he has been to. You could suggest he is a pay driver, I would not do such a thing.

"The vocabulary used around pay drivers is wrong," she insisted, "it's inappropriate and it's unnecessary, it puts a negativity around a driver that we just should not be doing in this sport anymore."

Anyone else feel Claire doth protest too much?