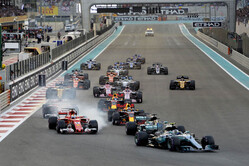 The latest proposal from F1 is either a very early April Fool or a sign that the sport's powers that be are losing the plot.

Technical boss Ross Brawn reveals that as F1 seeks to increase the calendar, he would like to see a "league table" whereby some races could be dropped in favour of others.

"The crucial thing is the quality of the race," he tells British Airways' Business Life magazine. "There's no value in just putting the number of races up.

"But if we can provide great races in great locations throughout the world, then we should consider it," he adds.

"I'd love to see in the future a league table of races, where over time we've got a waiting list of top-class circuits and promoters that are waiting to get into Formula 1, and then if there's any race that is not working well, you relegate that and put a strong race in."

Now, can anyone really see the likes of Abu Dhabi, one of the most unpopular circuits on the calendar - but one that also pays one of the highest fees to host a race, and has a contract - being dropped in favour of Assen, or Bahrain or Baku demoted to make way for Zandvoort?

To even suggest an idea that is beyond parody gives the impression that this particular asylum is already being run by the patients, or at the very least the sport’s powers that be take F1 fans for gullible mugs.