If prostitution is the oldest profession then running it a close second must be its sister in harlotry, PR. At its rare best, PR informs and advises, but most is just bull shit and has been since the first ruler employed a praise singer or commissioned a statue showing how mighty and wise and handsome he was.

Formula One is part of Show Biz and Show Biz loves to exaggerate. When a new movie is released its success is gauged by box office receipts. The value currency has declined over the years so the measure of popularity is corrupted. There is only one unit of measurement which matters: the bum upon a seat and no modern movie comes close to 'Gone With The Wind'.

One of Bernie's achievements was to skew Grand Prix history for his own ends. No non-Championship F1 race has taken place since 1980, yet there was once a rule that before a country could join the Championship, they first had to run an F1 race comparable to a Grand Prix. There were even occasions when a non-Championship race attracted a bigger field than a country's Grand Prix.

It is sometimes confidently stated that Chris Amon never won an F1 race when he won two. One was the 1970 International Trophy when he duelled in very wet conditions with Jackie Stewart and each was in a March 701. There have been World Champions who could not boast that they out-drove Stewart. The other victory was the 1971 Argentine GP, which was Argentina's proof that it was ready to rejoin the Championship. 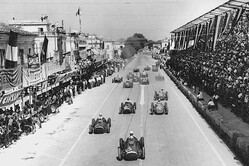 Grand Prix has become a synonym for F1, but for 46 years following the first Grand Prix, there was no World Championship. There were sometimes European Championships which were de facto world events, but they have been eased out of history. Such greats as Caracciola, Lang, Nuvolari, Varzi and Wimille scored not a single World Championship point between them.

Since every kiddie has to go home with a present, points are now awarded down to tenth. This wouldn't be so bad except that PR wallahs keep quoting totals. When Giuseppe Farina won the first World Championship, he did so with 30 points.

We have to go gee, gosh, willikins because Lewis Hamilton has scored more pole positions than anyone else, yet his score rate (72 poles from 207 starts) is inferior to that of Jim Clark (33 from 72 starts). Further, most of Clark's F1 career was in the 1500cc era when pole position was less important because the front row was three or four cars abreast and the field was not staggered.

Jimmy did not strap on qualifying gonads to set pole, he did it while exploring his car and the track. I do not wish to detract from Lewis's achievement because, today, there is a fight for pole. The fact remains that Clark was more likely to be on pole than Hamilton is and Jimmy had no reason to try hard.

A difference is that Clark is long deceased and PR wallahs have to drum up excitement now.

Fangio had an even better pole:start ratio than Clark and serious historians will know why I did not cite him. 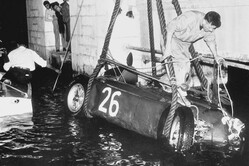 The one time that pole was important was at Reims, in the heart of Champagne country. For a time, Reims and Rouen used to alternate to have the title of French GP, but Reims always attracted a full field and was run over full distance. This is why Luigi Musso's win in 1957, a non-Champlonship year, should be regarded as equal to any Championship race.

Pole was important at Reims because it won 100 bottles of bubbly. One year Jack Brabham appeared to make a mistake at the Thillois hairpin and took to the escape road. From there he could hit the start/finish line quicker than had he taken the corner and he won the bubbly. Jack didn't want to drink it, he just wanted to win it.

Jean Behra never won a Championship race but, among many victories, there was the 1952 Reims GP (it was not the turn of Reims to award points) and the 1957 Moroccan GP run prior to Morocco having points the following year. A Championship point is notional, you cannot hold it in your hand or display it on your mantelpiece. Some of the greats never earned one, but now you get a point for trailing in tenth.

PR razzmatazz holds that Ayrton Senna was the greatest of his era and this is repeated by many commentators who do not know their history. It is repeated because it is an easy label which requires no effort to question. In the day, fans were equally divided between Prost and Senna and the choice usually came down to the temperament of the fan.

I know that a majority of experienced commentators at the time veered towards Prost, while denying Senna nothing. It was a close run thing, but Prost had it among the experts. 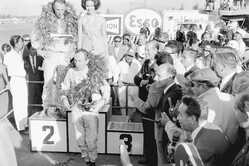 Among the many things about the coverage of motor racing that really bug me is the refusal to acknowledge that F1 officially came into being in 1948, before the World Championship began. In fact, some F1 races were run in 1946/7. In 1952-3, the World Championship was run to Formula Two. Some people seem to think that F2 replaced F1 completely, but there were non-Championship F1 events which meant that the V16 BRM actually won races.

Even after the World Championship began in 1950, there were many Grands Prix which did not score points. In 1961, the former Formula Two became Formula one and there were 22 F1 races of which only seven scored points. The Ferrari team won a total of seven F1 races, the same number as Stirling Moss in a private entry. In 1965, Jim Clark won 12 F1 races though only seven carried points.

One man who shares many of my attitudes is Brian Harvey who has written 'Formula One - The Real Score?' This is a 352-page book published by Veloce and it should be on every enthusiast's bookshelf. It is, by a country mile, the best single source I know which records the many non-Championship races which still attracted star entries.

Brian Harvey summarises every race up to the end of the non-Championship F1 event and awards each event a star rating based on the quality of the entry, three stars being the maximum and not scored by every Championship race. While this has to be subjective, I found little with which to argue.

Much of the book is a matter of record and that is a good enough reason to buy it. There are photographs which are useful reminders of period, rather than a coffee table spread.

What marks out 'Formula One - The Real Score?' is Brian Harvey's statistical analyses which are exhaustive and cover such aspects as a driver retiring while in the lead. Armed with this book, pub debates will never be dull.

Pub debates are never dull when knowledgeable people are involved, but so much that passes for Formula One knowledge is PR bullshit. I saw a TV show recently that claimed that Fangio's nickname was 'maestro'. That is bollocks, his nickname was El Chueco, or 'bandy legs' from the days when he played football as a youngster. Every serious work on the great man records this, but fact is not good enough for PR wallahs.

Brian Harvey has written an important book but I fear that his is a voice crying in the wilderness. Every serious enthusiast should own a copy for the historical record alone. The statistical analyses, which are impressive, are a bonus.

'Formula One - The Real Score?', by Brian Harvey, is published by Veloce at £40 and it is the only book on motor racing you need to buy this year.

We are indebted to Veloce for the pictures which accompany this article and which are all to be found in Brian Harvey's book. Of which, more details here.