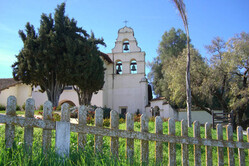 Since its purchase of the sport in January, Liberty Media has made no secret of the fact that it wants to expand the calendar. While a figure of 25 races has been mentioned, it is believed Liberty wants even more, especially in its American backyard.

However, plans for a race in Northern California are already under fire, with locals organising a petition and the mayor insisting the project will not get the green light.

In the wake of the success of the Circuit of the Americas in Texas and Liberty's purchase of the sport, a number of projects aimed at securing an F1 race are underway across the country.

In Northern California, William Yao, under the guise of WY2M Inc, is seeking to build a track on "550 acres of picturesque farm land located on the edge of Santa Clara and San Benito County".

Around forty minutes from San Jose international airport and around halfway between the Bay Area and the legendary Laguna Seca track, the proposed circuit, would include a hotel, country club and shops and would no-doubt target the nearby inhabitants of Silicon Valley.

The initial plan for the project was presented in July to the County of San Benito but already locals are up in arms for San Juan Bautista (right) is the closest city to the proposed site and up to ten acres of the site are located in San Juan Bautista city limits.

As a result, locals have launched a petition which claims that: "our lack of police department, lack of drinkable clean water, distressed roadways, and high traffic issues, is all evidence to support our inability to support the influx of people this project would bring.

"Our natural habitats are also of extreme concern. Our farmlands and open fields which border city limits, are a protection from corporate development for our small town. If we as a city allow these areas to be developed and paved, we lose our historic atmosphere which is the core of our local economy and culture."

It adds that: "This project will irreparably damage the culture of our small town and bring in many unnecessary complications to our local economy. We, the citizens and residents of San Juan Bautista and San Benito County, sign this petition as a protest to the proposed project and ask our representatives to respect our input and vote against it."

"I think there is very little likelihood that the proposal will move forward at all," San Juan Bautista's mayor Chris Martorana told Forbes. "Placing a track directly adjacent to a town of fewer than 2,000 residents with infrastructure that barely meets their needs seems to me to be unworkable. The traffic issues associated with the influx of 250,000 spectators is impossible from where I'm sitting.

"Our region is barely able to sustain the water needs of the current population and industry," he continued. "A track using millions of gallons a day, even for the limited number of operational days, is a pretty tough sell around here... At this point we haven't heard anything from the proponents in weeks. I suspect it's dead."

Far from it, it would appear.

WY2M confirms that it is "exploring land that is located in the San Benito County and adjacent to the city of San Juan Bautista.

"We are aware of the obstacles presented in developing this scale of a project in a small rural area," added WY2M is a statement, according to Forbes. "Water, in fact, is one of the obstacles. However, we are proposing to build a water treatment plant.

"We did meet with city council representatives from San Juan Bautista, as approximately ten acres of the 550 total acres of the property is located within San Juan Bautista city limits, to address questions surrounding the project. We are currently working with the County Supervisors and their staff to further explore and look at the next steps to bringing the project forward."

While the petition has only raised 162 signatures, this represents 10% of the population. Signing the petition, locals expressed their fears to the local Planning Commission, claiming that the project will "negatively impact wildlife, groundwater, sewage, traffic and parking as well as generating noise and fumes".

While many will claim that this is classic NIMBY-ism, it is not the only obstacle that Liberty will face in its plans to expand the sport in the United States.

The company has made no secret of its desire to see street races, and the likes of New York, with its iconic backdrop, remain at the top of the 'wish list'. While Las Vegas and Miami are also a priority, F1, which enviously looks on as Formula E adds more and more cities to its already impressive roster, faces other hurdles.

'Say No To Formula One Closing Miami Streets' ran the headline in the Miami Herald last week. The paper went on to claim that: "elected officials and their corporate fat cat friends want to turn our taxpayer-funded streets into a race track.

"It will cost us all to subsidise big business. Closing city streets - streets that are for our use. not for race cars. But what do we get?

"Tell the mayor & commissioners 'no' to a Formula One race through our neighbourhoods. Taxpayer money should go to repairing roads for our community not closing roads for race cars."

The huge costs of hosting a Grand Prix on a purpose built race track are high enough, working out at around an average of $31.1m (£23.7m) for the 21 races last year. However include the notorious escalator fees and this rises to $48.2m (£36.8m). Furthermore, most new contracts are for ten years.

Consequently, in fees alone, over a ten year period a promoter is paying around $391.2 (£299.1m), which is why in most instances the national government either needs to assist with the funding or pick up the entire bill.

With an eye on those iconic skylines, cut-price deals could be offered, especially when cities like New York can successfully demonstrate that it doesn't need the tourism boost that F1 will supposedly bring.

However, even a cut price fee would still see promoters need to dig deep.

According to Forbes, "staffing is the biggest single expense for operators of street races and comes to an annual cost of around $16 million. The budget for the marketing and organisation team is alone believed to come to $6.5 million.

"Next is rental of grandstands which costs around $14 million for structures with 80,000 seats. Securing a 3.2-mile street course with safety barriers and fencing costs in the region of $8 million which is also how much it costs to rent the pit buildings. Vehicle, office and utilities payments are around $6 million with a further $4.5 million of miscellaneous costs. Capping it all off is a payment of around $1 million for insurance.

Having previously lost India, Turkey and South Korea, this year Malaysia hosted its final race while Silverstone has terminated its contract to host a Grand Prix after 2019. All of these were hosted on purpose built tracks however, using city-friendly Formula E as an example, city tracks don't always mean success.

According to Montreal TV station, TVA, "70% of traders who responded to a survey said that it (the season ending Montreal event in July) dented their business. The Formule Citoyenne organization received responses from 70 traders and 49 of them said they experienced a negative impact from the race whilst 28.6% said they made no gain and only 1.4% made a profit".

"Although it had a positive impact on some businesses, many traders are still angry at this experience which sometimes cost them a lot," said Formule Citoyenne revealing that the lost earnings from the weekend ranged from $500 to $18,000 per trader. One of the driving forces being the competition between the race facilities and local businesses.

"Formula E is a mini-village isolated and autonomous, with its facilities, its infrastructures, its universe. A universe that includes 'food trucks' that are not from the area, to the detriment of nearby restaurants," said a Formule Citoyenne statement.

A Formula E event lasts just two days, while a Grand Prix lasts twice as long. While there can be admitted rewards, there are also huge costs leaving promoters (and taxpayers) facing a huge gamble... a gamble that even the likes of Las Vegas might well shy away from.

While some may well dismiss those 162 petition signing residents of San Juan Bautista as spoil sports and killjoys, once you start looking at the figures, all other issues aside, perhaps F1 is a luxury most cities can do without.