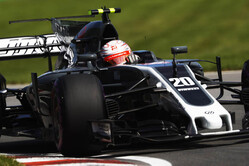 For the second time in Haas F1 Team history, drivers Kevin Magnussen and Romain Grosjean delivered a double-points performance as the duo finished eighth and ninth, respectively, in the Japanese Grand Prix Sunday at Suzuka Circuit.

Magnussen came from 12th on the grid to claim eighth and Grosjean followed his teammate, rising from his 13th-place starting spot to earn ninth. The first time both drivers finished in the points was 10 races ago at the Monaco Grand Prix where Grosjean finished eighth and Magnussen was 10th.

The double-points effort allowed Haas F1 Team to regain seventh in the constructors standings, leapfrogging the Renault factory outfit. Haas F1 Team came into the 16th round of the 2017 FIA Formula One World Championship trailing Renault by five points. It departs with a single-point advantage over Renault, and it closed the gap on sixth-place Toro Rosso to nine points.

Magnussen seized opportunities right from the start of the 53-lap race, dispatching the Scuderia Ferrari of Kimi Räikkönen and the McLaren of Stoffel Vandoorne to take 10th after one lap around the 5.807-kilometer (3.608-mile), 18-turn track.

Grosjean's ascent into the top-10 was more gradual. He grabbed 12th on lap two from Toro Rosso's Pierre Gasly and then took 11th from Lance Stroll on lap four when the Williams driver went wide in a corner. When Felipe Massa pitted his Williams on lap 17, both Haas F1 Team drivers advanced, with Magnussen moving to ninth and Grosjean taking 10th.

Pit stops ensued, with Magnussen and Grosjean on similar, one-stop strategies. Magnussen pitted on lap 19, swapping the Pirelli P Zero Red supersoft tires he began the race with for a new set of Yellow softs that would take him to the finish. Grosjean pitted on lap 23 and emulated the tire choice of his teammate.

It took until lap 40 for both drivers to return to the top-10, as the Renault duo of Nico Hulkenberg and Jolyon Palmer were the last to make their scheduled pit stops. Once they did, the Haas F1 Team drivers surged ahead of them.

Running ninth and 10th, Magnussen and Grosjean set their collective sights on eighth-place Massa. After a dogged pursuit, Magnussen made an aggressive move underneath Massa in between turns one and two on lap 42. After some slight banging of wheels off turn two, Magnussen had eighth. This opened the door for Grosjean to also overtake Massa. Without hesitation, Grosjean powered his Haas VF-17 past Massa and followed in the tire tracks of Magnussen.

Magnussen and Grosjean held their spots comfortably for the final 10 tours around Suzuka Circuit, delivering impressive drives for the American outfit.

Making the achievement even more gratifying was the tireless work Haas F1 Team put forth after Grosjean crashed in qualifying on Saturday. Crew members had to rebuild his racecar when a spin in turn five sent him off the track and hard into the barrier. Grosjean walked away unhurt, but his Haas VF-17 sustained heavy damage. But come the start of the Japanese Grand Prix, it was business as usual, with Grosjean taking a gleaming racecar to the grid.

Winning the Japanese Grand Prix from the pole was three-time Formula One champion Lewis Hamilton. The Mercedes driver scored his 61st career Formula One victory, his eighth of the season and third at Suzuka. Hamilton's margin of victory was 1.211 seconds over Red Bull's Max Verstappen. The triumph, combined with a DNF (Did Not Finish) by Scuderia Ferrari's Sebastian Vettel, who is Hamilton's nearest championship pursuer, allowed Hamilton to increase his lead in the standings to a stout 59 points.

Grosjean is 13th in the championship standings with 28 points and Magnussen is 14th with 15 points.

Four events remain on the 20-race Formula One schedule, with the series heading to Haas F1 Team's home race in two weeks. The United States Grand Prix takes place Oct. 22 at Circuit of the Americas in Austin, Texas.

Romain Grosjean: "It's our second double-score for the team, so that's pretty awesome. I'm very happy for the team. I knew yesterday I had some great pace in the car. I couldn't show it as I was always behind Kevin all race long, but I had much more pace in the car. I wish I could've been ahead. I think I could've fought with the Force Indias, so that's pretty good. We figured out how to get the tires to work a little bit better. It's clearly the key. When they work, it's so much faster. When they don't, you just struggle. We still need to improve that, but I felt much better in the car. I was happy with the brakes, everything went well. It's going to be great heading to Austin now for our second race there. It's such a cool track. I'm looking forward to seeing all the fans welcoming us and, hopefully, getting some more points there, as well."

Kevin Magnussen: "I enjoyed my race. We maximized our potential as a team getting P8 and P9 and scoring points. I don't think we could've hoped for better, so I'm happy for us. I feel I've had some good races lately, but just haven't had that bit of luck that I needed to get the points. Today, it worked out. Hopefully, I can keep this going and score more points over the last bit of the season. Results like today are definitely not easy to get. You need to get everything right, and I think we did today, so well done to the team."

Guenther Steiner: "It's a great result for the team. It's our second time with two cars in the points. Both drivers drove a great race. It was flawless. It's the best we can do and we did it. I'm very proud of everybody. It was a weekend that started badly. It was complex, but it ended well and that's all that counts."