Hamilton: Car feels back to normal 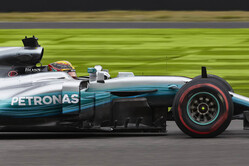 Unhappy with his car in the previous two races, despite winning one and finishing second in the other, Lewis Hamilton declared his W08 as being "back to normal" following the opening day of practice at Suzuka.

"It's been an interesting day," the Briton told reporters, "the car is feeling much better than it was in Malaysia. It feels back to normal, so I'm ready to race.

"I'm glad that we had the dry session for FP1," he added. "In FP2, there was a lot of rain, but it felt really important to go out and assess the track and see how the car was feeling as the car was not good in the wet in Malaysia."

Having dropped the new aero package Mercedes took to Malaysia, this weekend the Briton is giving it another go, as is teammate Valtteri Bottas who persevered with the package at Sepang.

However, the Finn who has been extremely vocal in criticising his own form since the summer break, was 0.985s off the pace in FP1, and one of 15 drivers who failed to post a timed lap in the second session.

"The car did feel better than it did in Malaysia," he said, "but we still need to work on things to make the car quicker. As a starting point for the weekend, it definitely feels better than a week ago.

"My run with the soft tyres was good," he continued, "but with the supersoft, I didn't really gain any grip. So the main thing for me is to understand the supersoft performance. The long runs actually weren't too bad, and hopefully we'll see better weather tomorrow."