Brown looking to invest 'Down Under' 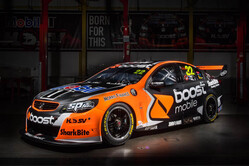 Brown and Ryan Walkinshaw, owner of Walkinshaw Racing and son of its founder and former Arrows owner Tom Walkinshaw, have confirmed that they've held discussions over a minority shareholding in the team.

"I can confirm that we've had a couple of conversations with Zak Brown," Walkinshaw told Speedcafe.com.

"If and when we have something to announce on that, we'll announce it in due course."

Walkinshaw Racing is one of the best-known teams in Australian touring cars, branded Supercars, but has struggled in recent years.

At the end of 2016 the squad lost its factory backing, and during the 2017 campaign parted ways with former Jordan Grand Prix Sporting Director Adrian Burgess, who had been at the helm of the squad.

Looking to rebuild and bring in fresh blood among its engineering ranks, Walkinshaw is searching for external investment.

As part of that, discussions with Brown, who owns a collection of racing cars which includes Walkinshaw Racing's 2011 Bathurst 1000 winning Holden Commodore, have taken place.

"We have been in talks with Ryan about becoming a partner in Walkinshaw Racing," Brown said.

"Our discussions haven't been about buying the team. We're looking at taking a minority stake. Talks are continuing and we hope to reach an agreement soon."

It's understood Brown would not become directly involved, as he already holds a host of board positions outside of McLaren, and would instead buy-in via United Autosports.

"I have plenty on my plate already, but I'm a motor sports fan - I live it 24/7 - and I'd certainly make time to keep a close eye on what's happening," he said.

"United Autosports has relationships with global brands that could assist them commercially."

Founded in 1990, Walkinshaw Racing has a total of 179 race wins, though has managed just a single podium for James Courtney in 2017.