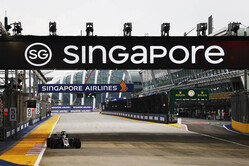 Both Grosjean and Magnussen ran exclusively on the Pirelli P Zero Purple ultrasoft tire throughout qualifying.

Taking the pole for the Singapore Grand Prix was Scuderia Ferrari driver Sebastian Vettel. His fast lap of 1:39.491 was the quickest all-time at Marina Bay Street Circuit and .323 of a second better than runner-up Max Verstappen of Red Bull. This was Vettel's 49th career Formula One pole, his third this season and fourth at Marina Bay.

Before Grosjean, Magnussen and the rest of their Formula One counterparts participated in knockout qualifying, they had one final practice (FP3) to dial in their racecars for a quick lap around the track. To emulate qualifying, both drivers ran exclusively on the Purple ultrasofts.

The two pilots ran the same 16-lap program, starting FP3 with a reconnaissance lap followed by a seven-lap stint on ultrasofts. A final eight-lap run on fresh ultrasofts netted both drivers their quickest times in final practice.

Quickest in FP3 was Verstappen, whose fast lap of 1:41.829 was .072 of a second better than Vettel, his nearest pursuer.

Romain Grosjean: "As long as you do your best in qualifying, that's the most important thing. I think from both of us it was the maximum we could've hoped for. We pushed pretty hard but, unfortunately, we don't have much balance here. I'm sure we're going to learn a lot from this weekend for the future but, of course, when you're deeply into it, it's a bit painful. From yesterday we've made some improvements. I'm proud of the work. It's a long race, a tough race. Hopefully, the car will work better tomorrow. We'll aim for the best strategy, maybe we can get lucky with a safety car, and try to get to the front somehow."

Kevin Magnussen: "I don't think Q2 was out of reach. I caught a Renault in the last corner of my last lap, which cost me the margin I needed to get through to Q2. It's been a tough weekend. We've not been strong enough, but we'll fight anyway. It's hard to say how the race will go. We'll wait and see tomorrow."

Guenther Steiner: "I think that was the most we could get for us this weekend. The midfield is so tight. We know a lot of things can happen here on a street circuit. Let's see what happens. For sure, we will try our best to get into the points."