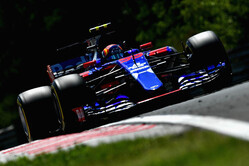 Carlos Sainz: "A fun race full of great battles! I enjoyed it a lot out there today and it's great to end up scoring a point that we were not expecting to get this weekend! On Friday we had really good pace, but after yesterday's qualifying we were not so sure we could achieve this today. We went for an alternative strategy after a difficult start - I lost a couple of places due to a bit of traffic into Turn 1 - and from then onwards we managed to do a good recovery. There was a lot of action going on throughout the whole race and, as a team, we did the right things at the right time. Today's point is a big reward - it tastes like glory! - and I leave Belgium satisfied with the result!"

Daniil Kvyat: "A good recovery today, taking into account that I started the race from the very back. It was a tough race, jumping into the car in race conditions without having done much running during the weekend… But I managed well and enjoyed some good battles. Every time I was in clean air I had great pace but then got stuck behind other cars in wrong moments, especially during the second half of the race, after the first pit-stop. All in all, it's good to finish the race after the difficult weekend we've had. We will now start to prepare for Monza - we're not expecting it to be our strongest track, but you never know what can happen and we will try our best to have a clean weekend and get a good result."

Franz Tost (Team Principal): "Spa was a difficult weekend for us. We expected it not to be easy and, unfortunately, that was the case, especially in Qualifying. We were only able to start from the mid-field with Carlos. Daniil, already from FP1, faced problems which we could not fix, so in the end we had to change the complete PU, which resulted in a grid position penalty. After the start, both cars were in traffic going into the first corner and they lost some positions. Nevertheless, Carlos could catch-up and finish the race in tenth position, scoring a point. I think this was the maximum he could extract from the car for today. He did a very strong first stint, where he managed the ultrasoft tyres quite in a special way, which helped him to extend the stint. Regarding Daniil, he was able to gain some positions during the race and he finished twelfth. I think the Safety Car didn't help us strategy wise, because of our tyre choice - without it, we could've had a bigger advantage at the end of the race. We now hope that we can score more points in Monza next week in order to protect our position in the Constructors' Championship."