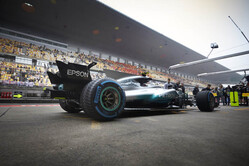 Track action was limited to a handful of laps today, with running suspended for the majority of FP1 and the entirely of FP2 due to poor visibility rendering the medical helicopter unable to fly. Lewis ran Extreme Wet tyres during his brief appearance in FP1, while Valtteri used Intermediates.

Valtteri Bottas: I'm really sorry for the fans, first of all. All the people came to see us in practice today but didn't see any running apart from a couple of laps in FP1, which is a shame. I promise we'll do all we can to make it exciting in Qualifying for them tomorrow and especially on race day. A big thank you to all those loyal fans for their support. The weather tomorrow is looking alright, fortunately. If it is wet on Saturday or Sunday it's no big drama. We have a little bit of information on the Intermediate tyre - more or less the same as any other team, so we're all in the same situation. Dry conditions will be the question mark at this point, so hopefully we get some dry running in FP3 tomorrow morning.

Lewis Hamilton: Obviously not a great day. I've only done one lap on the 2017 wet tyres so far this year and, from what I could tell on that out-lap, they feel pretty similar to last year's so I don't have any particular worries over it. But there's a bigger picture today. The track was absolutely fine and we could have run all day today with no issue if it weren't for the clouds. It's not good for the fans watching on TV and even worse for all those people in the stands, who have paid money to come out here from the city or even from other countries. They've barely seen a car on track today, which must be tough for them. We need to work together with the FIA and FOM to find a solution or an alternative plan of some kind when we have circumstances like this in the future.

James Allison, Technical Director: Missing Friday means we go into qualifying and the race not knowing as much about the tyres as we'd like, for example how long they will last and what the performance difference is between the compounds - and those data are the basis for your race strategy. We'll miss the time for set-up tweaking to fine-tune the balance as well, but these days you arrive at the track with a pretty good balance so we shouldn't be hurt too badly. The nature of modern Formula 1 is that, even if it's wet in practice, we limit the amount of running because you don't want to spin off or damage the car and be on the back foot for the rest of the weekend. So most of the time when the drivers use the Wet tyres it's a voyage of discovery for them - and that's where you see their ability really come to the fore. We are fortunate that, in situations like this, our two drivers have the skills to limit any disadvantage. Saturday should be the best of the three days in term of weather but Sunday is looking quite troublesome.