Video: A 360 degree lap of Albert Park with Carlos Sainz 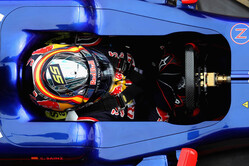 Carlos Sainz takes you on a 360 degree virtual lap of Albert Park, scene of this weekend's season opener.

The Spaniard drives the Melbourne track from the comfort of the team's Faenza factory, surrounded by various older Toro Rossos, from the STR1 to the STR11.

This isn't your standard demo lap mind, it's a totally immersive experience that means you can get a real feel for the Melbourne circuit which this weekend hosts the Australian Grand Prix, the first round of the season.

You can choose to watch Carlos while he talks you through it, or enjoy his point of view.

You can also rotate the view to see a wonderful display of all the cars from our past and even look down to see Carlos' feet dancing on the pedals.

Melbourne is a high downforce track and with the new generation cars, you can bet on plenty of excitement between its six straight sections, the three slow turns and the two high speed chicanes.

Albert Park is tough on brakes and tyres: the Melbourne weekend marks the debut of the new wider tyres and for this race, Pirelli has chosen the Supersoft and Soft compounds, as well as the Ultrasoft, making its first appearance at this circuit.

Now all you have to do is start the countdown and enjoy a 360 degree lap on the simulator.