Have fans been sold a pup? 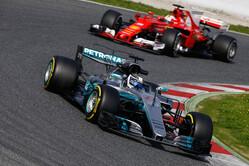 Though we try, God how we try, to be positive, at times it is almost impossible.

Not for the first time, the sport has pushed ahead with its own plans, the powers-that-be ignoring the will of the people, insisting 'we know best'.

While fans greeted talk of wider tyres with joy, there was general dismay at the fact that the sport would still rely heavily on aerodynamics, even though, as any barroom pundit can tell you, mechanical grip - over aero grip - will produce better racing.

Just one day into pre-season testing and some of our worst fears are being realised.

Ignoring the fact that Lewis Hamilton and Mercedes continue to top the timesheets, the German car - and, thankfully, its rival from Maranello running like clockwork - drivers are already admitting that overtaking will be more difficult and that the durability of the Pirelli rubber means one-stoppers are likely to be the norm.

"The tyres are so hard that they don't drop off," said Hamilton. "Normally you get a lot of degradation with these tyres - but these don't degrade, they're very consistent, and there's not a big difference between the feeling on the first lap and the last lap. Most likely we'll be doing more one-stoppers."

In terms of overtaking, the Briton poured more salt in the wound.

"I was behind a couple of cars and it was harder to follow, as we expected," he admitted, "and since there's no real degradation there's less mistakes, less overtaking.

"That's my prediction, I might be wrong," he thoughtfully added, "we'll find out."

And to further twist the knife...

"I still think we're the team to beat," he concluded, "but we have a lot of work ahead of us."

The Briton's fears in terms of overtaking we're echoed by a number of other drivers not least veteran Felipe Massa.

"Definitely from the driving point of view, it's much nicer for the driver," said the Williams driver, who ended the day third on the timesheets just 0.311s off the pace.

Furthermore, at a time there is increasing talk of curbing costs, there is talk of banning the likes of fins and T-wings – not forgetting certain suspension systems – after the teams have spent countless hundreds of thousands developing them.