Carey: The sport has not grown to its full potential 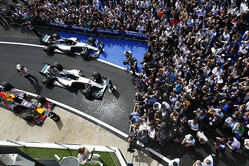 F1 CEO Chase Carey says that management change was needed as the sport had failed to reach its potential.

Hard to believe but after more than forty years the Ecclestone era is at an end and as Liberty Media completes its purchase of the sport he built, the Briton is removed as supremo and given the title Chairman Emeritus.

On a historic day for the sport, as Ecclestone was removed, the sport's new boss, Chase Carey, confirmed two key appointments, Ross Brawn to head the technical side of the sport and Sean Bratches to head the commercial side.

In recent months, as it prepared for the buy-out, Liberty set out its stall, promising more races - especially in America - better coverage, more involvement for the fans, talk of budget caps and turning Grands Prix into Super Bowl style events.

While some of it sounds good, some of it also sounds crass, and while some rush to welcome the sport's new owners, falling over themselves to be first to heap praise on the American company, others are a little more cautious. After all, Liberty Media is a business, it has shareholders who want a return on their money and in order to fund its purchase the company has had to take out loans which must be repaid.

We've said it before and we'll say it again, before people get too carried away, let's understand that Liberty Media has not bought F1 for altruistic reasons it has done so to make money. Whether it plays a more active role in the sport than CVC, which effectively sat back and waited as its coffers filled, remains to be seen.

On his first day as the sport's new supremo, Carey explained why the management changes have been made admitting that in many ways the sport has stagnated in recent years.

"As we looked at the business, we felt that - particularly over the past four or five years - the business had not grown," he told Sky Sports News, "not to its full potential.

"We needed to put a new organisation in place to be able to grow the sport in today's world in the way it needs to grow," he continued, "and in some ways work with the partners we have in the business to make sure we can make the sport everything it can and should be for its fans.

"I think both Sean and Ross will have critically important roles in developing the sport overall," he added. "Ross brings decades-long experience of incredible success in the sport. I think from his perspective what we want to do is make sure we make the sport on the track everything it can and should be, as exciting as possible for its fans, as energising as it can be for its fans.

"The drivers are iconic stars, it has cars that combine power and technology in a way that truly amazes people, a brand that has fans around the world. It is a great sport with great tools, but we need to continue to improve the sport on the track. Ross understands as much as anybody how the sport works, the ins and outs of the sport. So for Ross his real focus is how do we make the sport on the track everything it can and should be.

"I'm excited about the future," he concluded. "There's a lot that we want to do, and we're looking forward to getting on with it."