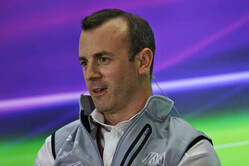 While Manor owner Stephen Fitzpatrick was willing to admit that after several months of discussions with various potential investors an agreement was finally forthcoming, he was unwilling to reveal the identity of the investor or whether it is a buy-in or a buy-out.

"I can't talk too much about the specifics but we have been in discussions with several investors, well, for the last six months let's say," he told reporters in Abu Dhabi today.

"One of the things I was quite clear on, right from the start, was that I accepted that in the current F1, money equals performance, so anything that was going to bring more funding to the team and help the team develop and progress I was very open and if that meant bringing another investor, even a majority investor, that was something I was happy to do.

"We have agreed terms with an investor at the moment and we are still working through that and I can't really talk more about the specifics."

Asked whether he would continue to be involved with the team and whether the deal is a buy-in or a buy-out, the Ovo Energy founder would only say: "I'm not going to talk anything about the specifics."

He was more talkative about the recent Brazilian Grand Prix however, where a strong drive from Felipe Nasr saw Sauber leapfrog his team in the constructors' standings a result that might mean as much as $15m to the Banbury-based outfit. Indeed, Fitzpatrick was surprisingly gracious in defeat, a rarity in the paddock.

"The first reaction wasn't really a financial one," he said of the result. "It would have been a very exciting race and coming to the end of what was an exhilarating season, lots of ups and downs. We had held tenth place for, I think, ten races, Brazil was number ten and at many points during the race there were lots of different scenarios and there was a lot of furious calculations about finishing the race at different points throughout.

"The first reaction I had was one of real disappointment for the team," he admitted. "I think they've worked incredibly hard for the last, let's say, 18 months since the start of last season without much reward and it looked like we were heading for a tenth-place finish which was a big step forward for us. So one of immediate disappointment for the team who worked so hard all year back at the factory and here on the circuit.

"But my next reaction was actually one of... I thought of the opposite feeling that must be going on in the Sauber garage and I thought that the guys in the Sauber team had been fantastic competitors for us all year, we'd enjoyed a great battle with them and I knew how much those points meant to the Sauber team and I was trying to imagine the joy they would be having and they worked so hard all season to bring it back in the end.

"So in the end I think the season doesn't come down to one race. Obviously the way the points are structured that was a critical race for us. Very unexpected. But that's racing. On that day it didn't go our way but I think we all want to see more of that unpredictability, that excitement. So, in the end, it was a difficult night, let's say, and then back to business."

Asked if the result in Brazil and its fall-out had affected his negotiations with the new investor, he admitted: "It doesn't help financially but the terms of our agreement have been... refinalised, let's say.

"It was clear that in tenth place with one point on the board, two races left, that there are lots of scenarios and you plan for those in advance, so, from my point of view it's disappointing but it's not unexpected... or at least not a surprise.

Asked if it was a potential deal-breaker, he replied: "Not a deal-breaker. And, most importantly, we're not finished yet. We're looking good today, at least, on Friday, so we've still got one race left."

Check out our Friday gallery from Abu Dhabi, here.