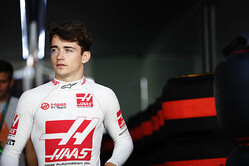 Monegasque youngster Charles Leclerc has opted not to drive the Haas in next weekend's opening F1 practice session in Abu Dhabi.

Taking to Twitter the youngster said that he wants to focus fully on the final rounds of the GP3 series which are also held at the Yas Marina next weekend.

"A really hard decision to make but I won't be driving in Abu Dhabi during the Free Practice 1 with Haas because of the timetable," he tweeted. "I want to be 100% focus on my GP3 title. Doing the FP1 would have mean, I had to jump from the F1 straight into GP3's qualifying."

The GP3 schedule in Abu Dhabi is different to other events in that qualifying for the all-important Feature Race takes place immediately after the opening F1 practice session.

Leclerc, a protege of the Ferrari Driver Academy, heads to Yas Marina with a 29 point lead over Thailand's Alexander Albon.

At the previous round at Sepang, Albon won the Feature Race thereby putting himself back in contention for the title.