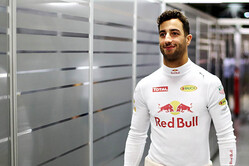 In the same way that Daniel Ricciardo's arrival at Red Bull lit a fire under Sebastian Vettel, so, it would appear, Max Verstappen's move to the Austrian team has fired up the Australian.

Though he is quick to dismiss the thought that he had effectively 'fallen asleep at the job', Ricciardo admits that Verstapen's replacement of Daniil Kvyat ahead of the Spanish Grand Prix has helped him raise his game ever higher.

"Up until the point when Max arrived I thought that I was pretty much driving up to my limit," Ricciardo told the official website, "but now I know that I can do a little bit more. But that also goes for him. We both stepped up.

"We both lifted our game," he continued, "and that was to the gain of the team. When you get a new team mate it is always exciting as there is a new challenge. Had he come to the team and 'kicked my ass' for ten races in a row, my career would probably be running south - but that didn't happen. So it is still curiosity, but of course also pressure - but in an exciting way.

"When I saw him in the first practice in Barcelona I could already see that he was on the limit with the car, so I knew that this was going to be exciting. Before, when I raced alongside Seb I knew that if I outperformed him - a four-time world champion - it would definitely be good for my career. And if I could get on top of Max - the new kid on the block - that would have another significance. But from what we have seen of what Max is capable of, it is a pretty equal situation."

Asked if he feels his career has flat-lined, compared to his first couple of seasons in F1, he replies: "The only moment when I can remember being disappointed was the first half of 2015 when, after an incredible 2014, things didn't progress the way that I wanted.

"So yes, probably I was struggling a bit not to get podiums last year, but 2016 I definitely feel the upward trend, also probably because I have learned to drive around problems better. Now I really appreciate the feeling that the car is getting better, and that I still feel enjoyment.

"You want to win every race, but of course you can't win every race - even if you are sitting in a Mercedes. So yes, I do enjoy a fifth place, like in Monza for example, as I felt it was a good race.

"Nothing beats winning, and I want to win," he adds, "that is for sure. But it is also satisfying on a race weekend knowing that I have done everything possible from my side. I am definitely satisfied with that.

"Yes, the win is the cherry on the top, a nice cherry, though. Maybe in Austria and Silverstone I was a bit down after the race, but besides those actually every race Sunday I felt pretty happy. I haven't won Monaco and still I was happy with how I drove.

"I don't think right now, 'Oh boy, why haven't I won a race so far this season?'," he admits. "I think it can still happen. But on the other hand, Singapore was an exceptional chance, probably our best shot.

"I am still confident that we can still pull something out. I have faith! Sure, I feel that I have deserved a victory this year, but I am also sure that there is no one up there who is going to give it to me.

"But getting back to Singapore, it was great fun and I enjoyed battling with the Mercedes. It was a good race and not heart-breaking not to win. I did what I could."